Council diplomats involved in the negotiations said on Friday that progress was being made, though it was still uncertain whether any of them would vote “yes.”

The vote, which had been expected on Saturday, has now been put off until Monday morning and the resolution will be circulated in its final form early Saturday, the diplomats said, speaking on condition of anonymity because negotiations are still taking place.

“We think the wider the base of support, the clearer the political signal” sent to Iran, John Sawers, Britain’s UN Ambassador, said on Thursday.

The draft resolution would expand travel restrictions and the freezing of assets to more Iranian officials linked to the nuclear effort, and impose a travel ban on some of those most involved in proliferation activity.

For the first time, it would ban trade with Iran in goods that have both civilian and military uses. It would introduce financial monitoring on two banks with suspected links to proliferation activities, and call on all countries “to exercise vigilance” in granting export credits, guarantees or insurance.

It would also authorize inspections of shipments to and from Iran that are suspected of carrying prohibited goods. 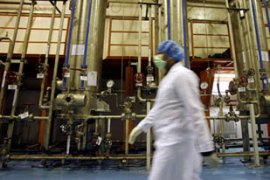 Security Council members to hold discussions before vote on third set of sanctions. 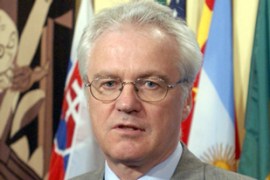 Moscow to back further UN sanctions unless enrichment ends in next few days.