Self help
The president also promised more job opportunities, special training contracts to help young people find employment and plans to send children to schools in different areas to ensure what he said would be a good social mix.
Sarkozy unveiled his plan just ahead of municipal elections on March 9 and 16.

His popularity has plummeted since the beginning of the year and his party fears it will pay for this in the polls.

Voters’ main concern are a feeling of lost spending power, and they say he has concentrated more on his private life with new wife Carla Bruni, rather than helping them out.

Sarkozy stood beside Fadela Amara, urban policy minister and one of several left-wing figures in the government, as he revealed his plan.

The announcement follows on from proposals revealed by Amara last year.

Sarkozy said he would not stand for discrimination and urged the country’s elite institutions, such as the Henri IV high school or the ENA civil servant training school, to be more diverse.

But Sarkozy, who was a hardline interior minister at the time of the 2005 riots, also said the state could not help those living in poverty who were not willing to help themselves.

“Those who don’t want to do anything, the state will not do anything for them,” he said.

Sarkozy’s uncompromising position with the mostly young rioters when he was interior minister and his pledge to clean them out with a steamblaster generated deep hostility among many in the suburbs and he has rarely returned.

Last month, he made his first visit to an impoverished suburb since he was elected last May and met and talked to several young people.

In his rermarks on Friday, Sarkozy continued to take a tough line with those refusing to respect French culture and way of life.

“There is no place in France for polygamy, genital mutilation, arranged marriages, veils in school and hatred of France,” he said. 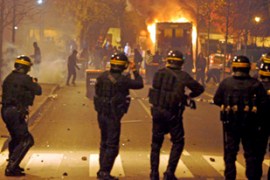 More than 70 police officers injured and many youths held after two nights of riots. 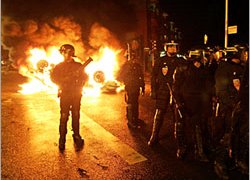 As France struggled to find ways to end night-time rioting which has raged around Paris’s suburbs for a week, here is a timeline of the troubles.