‘Just’ increase
Russia imposed the first in a series of steep increases in the price of gas for Ukraine in early 2006.
A price dispute then briefly halted supplies and disrupted flows to Gazprom’s European customers.

Yulia Tymoshenko, Ukraine’s prime minister, said last month that she hoped to negotiate a “just” increase in the tariffs that Ukraine charges for the transit of Russian gas across its territory.

Kupriyanov said Russia had increased gas supplies to Turkey, Greece and Ukraine since the beginning of the year after the countries faced lower deliveries from other suppliers.

He said: “All our partners follow payments schedules and it is only with Ukraine that a paradoxical situation has emerged where it gets the gas it needs, but does not pay for it.”

An increasingly assertive Russia has been involved in repeated disputes with the countries through which it ships its gas to Europe and which get Russian gas at subsidised prices.

A new Ukraine government has recently sought to revise the terms of its gas agreement and Viktor Yushchenko, Ukraine’s pro-Western president, is due to visit Moscow next Tuesday.

Vladimir Putin, Russia’s president, has branded as parasites the energy transit states that have benefitted from shipping fees and cheap Russian energy and said Moscow should stop subsidising them.

However, analysts say Russia also wants to ensure it does not harm its reputation as a reliable gas supplier to Europe.

About 80 per cent of Russia’s gas exports to Europe go through Ukraine.

Andris Piebalgs, the EU energy commissioner, said: “Gazprom has given assurances that gas supplies to the European Union will not be interrupted.”

Two sides settle a payment dispute that had threatened disruption in gas supplies. 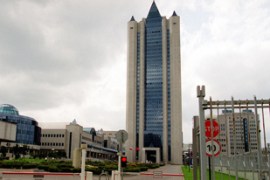