Falling demand
Halvard Johansen, a director at Norway’s fisheries and coastal affairs ministry, said: “We set quotas not according to what is likely to be caught but what is sustainable.”
The ministry said in a statement that it sets quotas “conservatively”, ensuring “complete safety in regard to conserving minke whale stock”.
The latest IWC estimate said some 107,000 minkes live in Atlantic waters off Norway and the animal, which can grow some nine metres long, are not in danger of extinction.
The ministry and whaling groups say rough seas, which make it difficult to spot whales, and high fuel prices have limited catches in past years.
Groups such as Greenpeace say the underlying reason is that demand for whale meat has dropped.
Truls Gulowsen, from Greenpeace, said: “Despite marketing campaigns for whale meat, there are no indications that demand is going anywhere other than down.
“The government’s adherence to whaling is purely symbolic, giving the appearance of supporting embattled coastal communities on a high profile issue.”
Johansen said that Norwegians had consumed all of the domestic whale catch in past years.
He said: “There is very little whale meat in stores at the moment and reserves will run out before the new (whaling) season starts.”
The whaling season runs from April to August.
Greenpeace and other anti-whaling activists say that Norway’s defiance of the whaling ban makes little sense because its whaling sector employs only several hundred people, the majority on a part-time basis.
Johansen agreed the industry was small but added: “Whaling is part of our fishing tradition, and we believe we have the right to use the resources available to us. And it is done according to the best scientific data to protect the species.”
Source: News Agencies 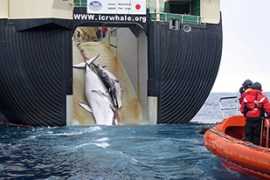 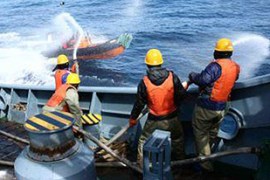 Hunting resumes as activists forced to return to port after running out of fuel. 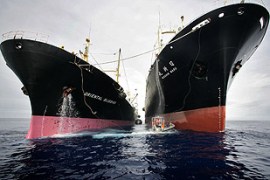 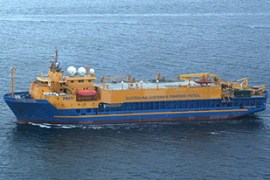 Australia intervenes to take activists from Japanese whaler to their protest ship.