State-media in Khartoum has even reported that Sudan is trying to mediate a truce between the two sides.

Salah Gosh, the intelligence forces chief, is quoted as saying: “Sudan called for the evacuation of the opposition from Ndjamena and the opposition agreed.

“We have joined efforts with the Libyans on reaching a ceasefire.”

Idriss Deby, the president, also called on Thursday for an EU peacekeeping force to assist his troops.
On French radio, Deby, 55, said: “I issue a solemn call to the European Union and France to do the necessary so this force [deploys] as quickly as possible to lighten the load we bear today.”
Deby claimed on Wednesday that the government had pushed the rebels back to the borders of Chad.
However, French ministers said that reconnaissance by their military aircraft found opposition fighters to be regrouping, albeit slowly, outside the capital.
It is thought that some fighters are hiding in the civilian population.
France, Chad’s former colonial ruler, has a military base in the country and has said it will support the government militarily.
Tense neighbours
The Chad government has said that the fighters are Sudanese and backed by the Sudanese government.

Both nations have previously accused each other of funding attacks against each other.

Deby’s government refused a ceasefire offered by the rebels on Tuesday, saying it would be immaterial as they had been defeated.
Fighting has eased since Monday. It is unclear how many people have died in the battles but the International Red Cross has said that more than 1,000 people, including many civilians, have been wounded.
Displacement is also a considerable problem. The UN refugee agency has said that up to 20,000 locals have fled to neighbouring Cameroon.
The Chadian government has called for residents to return to the capital but many are staying away for fear of further fighting.
Source: News Agencies 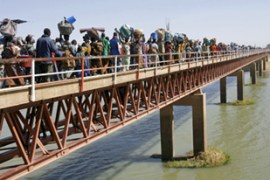 President says rebel fighters will be pursued and firmly dealt with. 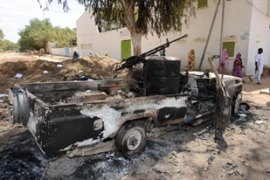 Ndjamena quiet after the government says rebel forces were “decimated”. 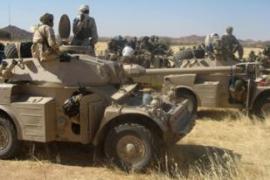 France says it will launch a military operation against the rebels if necessary.