The proposed $3.1 trillion in spending projects sizable increases in national security but forces the rest of government to pinch pennies.
Cuts and deficits
It cuts the government’s healthcare programmes for the elderly and for the poor by $196bn over five years at a time when experts say major increases are needed just to maintain current levels of care as the huge post-World War II baby boomer generation reaches retirement age.

Bush’s budget also projects that deficits will soar to near-record levels of $410bn this year and $407bn in 2009, driven higher in part by efforts to revive the sagging economy with a $145bn stimulus package.

Democrats called Bush’s final spending plan – for the 2009 fiscal year beginning on October 1 – a continuation of this administration’s failed policies which wiped out a projected 10-year surplus of $5.6 trillion and replaced it with a record build-up in debt.
“Today’s budget bears all the hallmarks of the Bush legacy – it leads to more deficits, more debt, more tax cuts, more cutbacks in critical services,” said John Spratt, the Democratic chairman of the House Budget Committee.
Harry Reid, the Democratic senate majority leader, said the budget “is fiscally irresponsible and highly deceptive, hiding the costs of the war in Iraq while increasing the skyrocketing debt”.
But the president defended the budget, saying it would keep the US militarily safe and economically sound.
“Two key principles guided the development of my budget – keeping America safe and ensuring our continued prosperity,” he said in his budget message to congress.
Bush projects that the deficit will decline rapidly starting in 2010 and will achieve a $48bn balance in 2012.
Unrealistic Iraq numbers
But Democrats said that forecast was based on flawed calculations that only include $70bn for the wars in Iraq and Afghanistan in 2009 and no money after that.
Even Dana Perino, the White House press secretary, acknowledge that estimate was unrealistic, telling reporters that the war effort in 2009 would “certainly” cost more than that.
In a sign of just how little of Bush’s political capital remains, even members of his own party criticised the budget.
Judd Gregg, the senior Republican on the senate budget committee, faulted Bush’s budget sleight of hand to project a balanced budget in 2012.
“They’ve obviously played an inordinate number of games to try to make it look better,” he told the Associated Press.
“Let’s face it. This budget is done with the understanding that nobody’s going to be taking a long, hard look at it.”
Bush’s proposed budget sets the stage for lengthy battles in his last year in office, as both parties seek to gain advantages with voters heading into the November elections.
Source: News Agencies 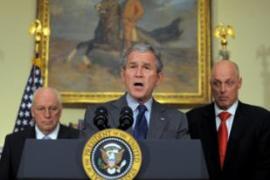 US loses jobs amid recession fears

The first such dip in four years comes despite unemployment rate falling slightly. 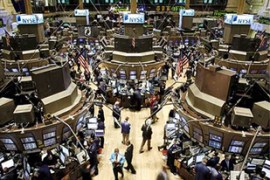 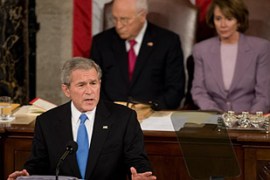 US president warns against early pullout in his final State of the Union speech.