He is expected to ask for bail and then proceed to the department of special investigations where he is charged with allegedly concealing ownership of shares in a family business.
Thaksin has vowed to fight the charges and seek the release of hundreds of millions of dollars in frozen assets seized after the military coup 17 months ago.
He expressed confidence in seeing justice through the Thai court system before boarding his flight in Hong Kong.

“Normally in justice systems everywhere, a person is innocent until proved guilty,” he said.

He said he was a “little bit” concerned about his safety once in Bangkok, but did not think his return would spark violence.

“I used to say when I was prime minister that there were attempts to assassinate me,” he said.

“Normally I would have some concerns but I hope that everyone is thinking of national reconciliation and they will prepare [security measures] for me well.”

About 3,000 had gathered at Bangkok‘s airport since before dawn, dancing, beating drums, singing and carrying signs that read “We love Thaksin”, most of them brought in from nearby provinces on chartered buses.

Police Lieutenant-General Prung Bunpadung said about 1,000 police officers had been deployed at the airport, along Thaksin’s route of travel and places he was expected to visit during the day.

The billionaire-politician and his wife, Pojaman, each face up to 13 years in jail over two corruption charges alleging she used her husband’s political influence to buy prime Bangkok property from a government agency at about one third of its estimated value.

The two also face separate charges of making fraudulent filings with the Securities and Exchange Commission over the 2003 listing of a property company.

Thaksin’s opponents say his return is no surprise, coming soon after his political allies in the People Power party (PPP) formed the government after wining the general elections in December.

Critics say his return could re-ignite deep political divisions that led to his downfall.

Chamlong Srimuang, a former Bangkok governor, said Thaksin’s pledge to stay out of politics was a “political game”, and that he had continued playing an important role in Thai politics while in exile.

“Thaksin will plunge the country into a greater crisis that people will not be able to tolerate any longer,” said Chamlong, a one-time Thaksin ally.

Thaksin’s opponents have also threatened to mobilise protesters and stage demonstrations if the new government tries to intervene in the legal process against him.

On Wednesday, the country’s newly-elected prime minister, Samak Sundaravej, who heads the PPP which is regarded as Thaksin’s proxy, said he was happy to welcome the former premier back and gave assurances that he would be given a fair trial.

Thaksin’s party, Thai Rak Thai, was outlawed after the bloodless military coup in September 2006, and he has been banned from politics for five years.

Joined police force before winning a scholarship to study criminal justice in US.

Started computer dealership in 1987, which evolved into Shin Corp telecoms conglomerate, making him one of Thailand‘s richest and most powerful men.

Entering politics he won landslide victories in 2001 and 2005, backed by Thailand‘s rural and urban workers.

But corruption scandals and alleged abuses of power eroded his popularity among Bangkok‘s middle classes.

His family’s tax-free sale in 2006 of their $1.9bn stake in Shin Corp triggered street protests.

In an effort to defuse growing anger, Thaksin called snap elections which were later annulled.

In September 2006, with Thaksin in New York to address the UN, Thailand’s armed forces moved to oust him in a bloodless coup. 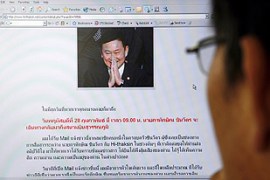 Former PM flies home to Bangkok 17 months after he was ousted in a bloodless coup. 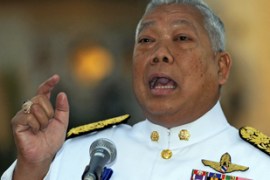 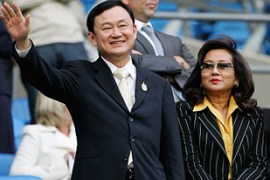 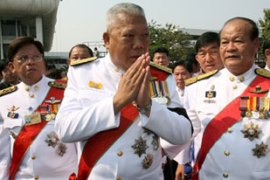