Mwai Kibaki, the Kenyan president, and Raila Odinga, the opposition leader, have signed a power-sharing agreement after weeks of nationwide violence and political unrest which followed a disputed election.

Kofi Annan, the former UN secretary-general who has been mediating the talks between the government and the opposition, said on Thursday that an agreement had been made, which introduced a position of prime minister into the government for the first time in Kenya’s history.
“We do have a deal, thus our work on the government structure for Kenya has successfully been completed today,” he said.
“In the signed document … we have agreed to a formula that includes … a post of prime minister for the government of Kenya, with authority to co-ordinate, implement and supervise the execution of the functions and affairs of the government of Kenya.
“The prime minister will be an elected member of parliament and the parliamentary leader of the largest party in the national assembly or of a coalition if the largest party does not command a majority,” he said.

Annan added that the cabinet would consist of “the president, vice president, prime minister, two deputy prime minsters and other ministers” and that the prime minister “could only be removed if the national assembly passes a motion of no confidence with a majority vote”.

“We believe by these steps, we can, together in the spirit of partnership, bring peace and prosperity back to the people of Kenya, who so richly deserve it,” he said.

“Let the spirit of healing begin today, let it begin now… Compromise was necessary for the survival of this country.”
Yvonne Ndege, Al Jazeera’s correspondent in Nairobi, said local television reported that the power-sharing deal allegedly included a fifty-fifty cabinet, within which the opposition Orange Democratic Party (ODM) would get key posts.

Fifty per cent of cabinet positions would go to the ODM, with the the position of prime minister likely going to Odinga, Ndege said.

Annan had suspended talks on Tuesday after negotiators for either side could not agree on a deal.

Primary in disagreements was the level of power to be assigned to the prime minister.
The crisis started after presidential elections on December 27 were disputed. The ODM claimed the election had been rigged.
More than 1,500 people have died in inter-tribal rioting and clashes since the poll.
Source : Al Jazeera, News Agencies 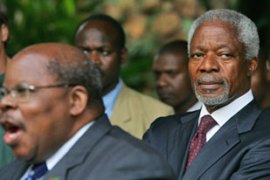 Pressure grows on Odinga and Kibaki to find compromise and end post-election crisis. 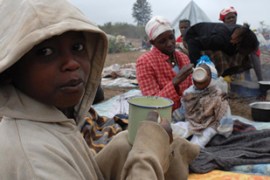 Former UN chief says he will speak to president and opposition leader separately. 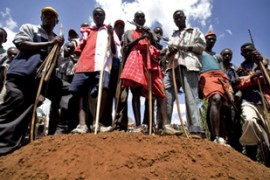