The four were reunited with tearful relatives after being flown from the Colombian jungle by helicopter to a military airbase in southern Venezuela before being transferred to an aircraft to Caracas.
Perez said on arrival in Caracas that he and the others had suffered “subhuman conditions” during their captivity.
Last month, the Farc also released two female Colombian legislators, Consuelo Gonzalez and Clara Rojas, in a deal brokered by Hugo Chavez, the Venezuelan president.
Hostages’ health
The Revolutionary Armed Forces of Colombia (Farc) had offered on February 2 to hand over three hostages to the Venezuelan president.
Gechem was later added to the list on health grounds, as he is reportedly suffering from heart, back and ulcer problems.
The former state senator was kidnapped six years ago after Farc fighters hijacked a commercial aircraft he was travelling on.
His fellow former hostage, Polanco, was kidnapped with two of her sons, who were later released. Her husband, a prominent politician, was later killed by the Farc.
Her other son Daniel, who was 11-years-old when his mother was seized, told journalists in Caracas on Wednesday that the kidnapping “surely tears out one’s insides”.
Remaining captives

The hostages are part of a group of about 40 captives whom the Farc want to swap in exchange for 500 of their fighters being held in Colombian prisons.

Those still being held include three US Pentagon contractors and Ingrid Betancourt, the French-Colombian former politician.
Last week, rallies were held in France and Colombia to protest against Betancourt’s continued detention.

Betancourt was “in extremely tough straits”, Perez said on Wednesday.

Perez, whom Betancourt considered her best friend in captivity, according to a letter she wrote to her family, said he last saw her on February 4.

The Colombian government says Farc is holding about 700 people hostage, many of them civilians.
Chavez’s role
Al Jazeera’s Lucia Newman said that Farc had freed the hostages because they wanted to be seen as a legitimate fighting force.
They also want the Colombian government to demilitarise a large area of the country so that negotiations can be held over a prisoner exchange.
Alvaro Uribe, the Colombian president, has indicated a willingness to negotiate an exchange of prisoners, but has ruled out demilitarisation of such a large and populated part of the country – suggesting a smaller, less inhabited zone instead.
Chavez has been involved in the hostage negotiations since last year, but a deal to free Gonzalez and Rojas had initially collapsed amid acrimony between Uribe and Chavez.
The Venezuelan president angered Colombia further when he said that Farc should not be labelled as a terrorist group but as a “belligerent force”, with legitimate political aims.
Source : News Agencies 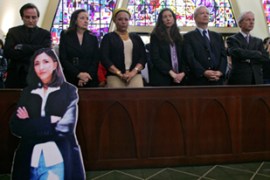 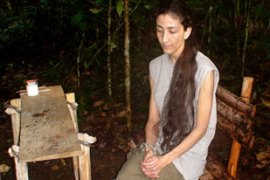 More Farc hostages ‘to be freed’

French foreign minister says this after talks with Venezuelan president. 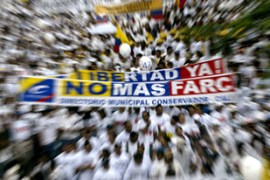 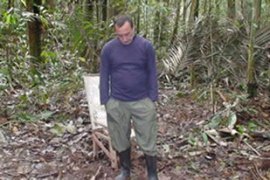 Four politicians had been held by the rebel group for more than six years.