Two fighters from the al-Aqsa Martyrs Brigades were also killed by Israeli air raids in Nablus, in the occupied West Bank on Thursday.
The Israeli military confirmed the attack, saying they hit command posts and weapons manufacturing and storing sites.
Ehud Olmert, the Israeli prime minister, said on a visit to Japan on Thursday that Israeli assaults on Gaza would continue.

“We are at the height of this battle and we will pursue it until the danger threatening residents in the south ends.

Israeli aircraft also fired missiles at a police post about 150m from the home of Ismail Haniya, the ousted prime minister from Hamas, on Thursday, Palestinian officials said.

Hamas said the house was not damaged, but one person was killed and four others wounded at the police road block.

On Wednesday, Israeli aircraft fired at Haniya’s office and the Hamas-run interior ministry.

That attack killed Mohammed Bourai, a 6-month-old baby boy, and left many others wounded, hospital officials said.
A Palestinian security source said an Israeli helicopter had fired on a metals workshop in the east of Gaza City late on Wednesday.
Earlier on Wednesday, five senior members of Hamas were killed when the vehicle in which they were travelling was attacked from the air near the southern Gaza town of Khan Younis, medical officials said.
Hamas said the five were members of the Izz al-Din al-Qassam Brigades, its armed wing.
Two missiles directly hit the minivan they were travelling in, witnesses told Al Jazeera.
Moaiya Hassanain, a Gaza health ministry official, said four other people were wounded in the attack.
A spokeswoman for the Israeli military confirmed that it had “carried out strikes on vehicles in Khan Younis and identified hitting them”.
Hamas rockets
Meanwhile, Hamas fired 40 rockets into Israel, killing one Israeli and wounding another on Wednesday.

Hamas said it fired rockets into Israel in response “to the Zionist massacre committed this morning in Khan Younis which led to the martyrdom of five of our best fighters”.

Israeli media said the Hamas rocket exploded in a car park at Sapir College in Sderot.
Israeli officials said a 47-year-old student was fatally struck in the heart by shrapnel while television footage showed a second man being carried on a stretcher with wounds to his legs.
The first such Israeli death in nine months intensified calls within Israel to launch a full-scale ground invasion, with Ehud Barak, the defence minister, vowing to “get those responsible”.
Tit-for-tat
Meir Sheetrit, an Israeli cabinet minister, said if it were up to him, he “would hit everything that moves with weapons and ammunition”.
“I don’t think we have to show pity for anyone who wants to kill us,” he said.

A poll published on Wednesday, before the fatal rocket attack, showed that a majority of Israelis favour talks with Hamas to stop the barrages, as well as to secure the release of a soldier captured in 2006.

But Israel’s government has ruled out talks with Hamas.
The spike in violence provides a troubling prelude to the latest visit by Condoleezza Rice, the US secretary of state, whose aides confirmed that she would arrive on Monday for several days of talks on the US-sponsored peace process.
The Israeli military carries out near-daily air strikes in Gaza, targeting Palestinian armed groups firing rockets into Israel.
Hamas says attacks from the Gaza Strip, including rockets fired by its own fighters and others, are a response to Israeli military operations in the territory and the occupied West Bank and would end if Israel stopped all such activity and lifted its blockade.
Source : Al Jazeera, News Agencies 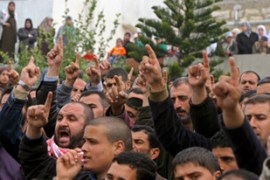 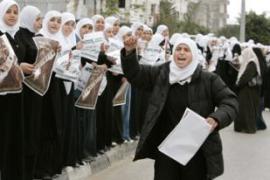 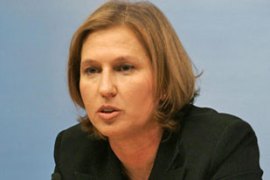 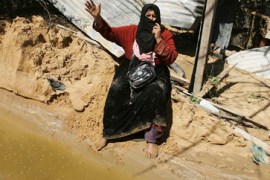 Colombia’s FARC adopts new name as it rebrands itself