Marina Barbagelata, one of Navone’s lawyers, said the former officer had important information about the fate of the abducted babies.
“It is highly probable there are people who could feel threatened by the testimony,” she said on Tuesday.

In December, another military officer linked to abuses during the period of military rule was found dead.

Hector Febres, a coast guard officer, was found dead on December 10 in his prison cell, poisoned by cyanide.

Authorities believed he was ready to reveal details about kidnapped babies, and two other officers have been implicated in the case.

During military rule, about 200 babies were kidnapped from their parents, of whom 88 have been identified due to efforts by human rights activists.

Under the military government about 30,000 political opponents “disappeared,” most of whom were murdered, rights groups say.

Argentina has since revived human rights trials dating back to the “dirty war” era.

Navone was accused of involvement in the 1978 kidnapping of twins born to a political prisoner in a military hospital.

Estela de Carlotto, the president of Grandmothers of Plaza de Mayo, a group of women searching for their missing grandchildren, called for a full investigation into his death.

“In the Febres case, it was clearly shown that he was killed with cyanide. His own comrades conspired to shut his mouth,” she said.

“What mafia was involved in taking our grandchildren that each time one of them has to testify, he’s killed to keep his mouth shut?” 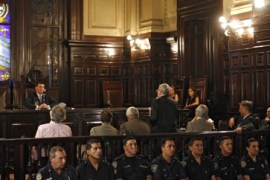 Eight former officials get prison terms between 20 and 25 years on a range of charges. 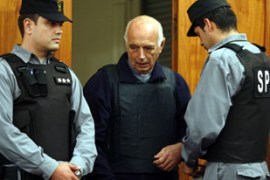