“I heard the sound of the cries upstairs and I called my father, ‘Pa Pa’, like that, but my father was already dead.”

Saw Say Say, the son of Mahn Sha Lar Phan, former secretary-general of the Karen National Union (KNU), told Al Jazeera of his pain after finding his father dead at their home near the Thai border town of Mae Sot.

Mahn Sha was an influential mediator for the KNU, a movement which has been fighting Myanmar’s military government for autonomy since Myanmar’s independence from Britain in 1948 – one of the longest conflicts for independence in the world.

No one has admitted responsibility for the murder on February 14, but the blame was immediately placed on Myanmar’s military government, which, some allege, has been circulating a hit-list around Thailand and that Mahn Sha’s name was on it.

Lian Sakhong, general-secretary of the ethnic national council, and a personal friend of Mahn Sha told Al Jazeera that Mahn Sha’s death was a big loss for the KNU movement.

“He was trying to rebuild the union of Burma into a peaceful country and change the country into a democratic and open society.

Myanmar’s military government, the State Peace and Development Council (SPDC), did not allow Mahn Sha’s body to be buried in Myanmar, instead he was buried in a KNU-controlled area close to the border with Thailand.

The funeral took place on Monday, with more than 500 Karen, who live in exile in Thailand, making the journey across the Moi river, to attend the traditional Buddhist ceremony.

Some Karen believe that Mahn Sha’s assassination may have been orchestrated by one of the splinter groups which recently broke away from the KNU and sided with the government.

David Taw, the KNU foreign affairs spokesman, said: “I think that the international [community] should keep watching what the SPDC is doing nowadays and then what atrocities have happened to the people.

“And then directly, now, how it has targeted some of our leaders.”

Professor Win Min, from Chiang Mai University, Thailand, said: “[During] the September crackdown, after the military felt that they could control the situation in the cities, they sent some troops out to the border, in a regular offensive against the KNU.”

He said that the main aim of the government and the splinter groups was to “wipe out the KNU” and “to make more and more splits in the KNU”.

Despite the death of Mahn Shah, KNU leaders remain defiant that their people can withstand what they have described as a continued onslaught by Myanmar’s military.

The union has already selected a new general secretary, Colonel Tutulay, who, Sakhong said, was “a charasmatic and highly educated leader”.

In an interview with Al Jazeera in October, Mahn Sha called for solidarity, after predicting an increase in violence ahead of a constitutional referendum in Myanmar in May.

“To run away from Rangoon is not the answer,” he said. “The answer is to fight more to abolish the military regime.”

The KNU is committed to its armed struggle, and has said the day will come when the next generation of Karen can live in peace in their homeland.

With tributes to Mahn Sha flooding in from around the world, his son said the Karen desire to continue its 58-year-old conflict for independence would go on. 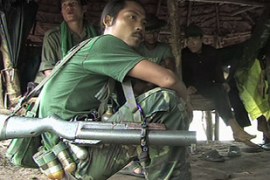 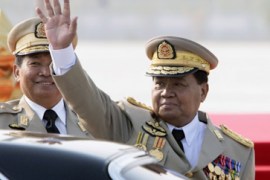 Military calls for discipline in aftermath of crackdown on democracy protests. 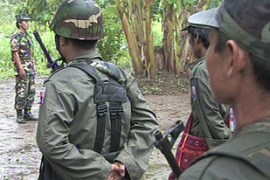 Karen fighters blamed for attack in which four women and baby are killed.