Deadly ambush
Prosecutors said Lieutenant-Colonel Byron Carvajal, leader of the soldiers, ordered the ambush in the western town of Jamundi in May 2006, where an informant tipped off the police that a cocaine haul had been stashed.
The soldiers opened fire despite the police shouting “don’t shoot, we are police, we have families”, witnesses said.
Carvajal, who was not at the scene, said his soldiers believed they were surprising rebels from the Farc group.
However, the presiding judge said Carvajal was guilty of issuing the orders and instructions for the killings.
Senior officials told AP they believed the men were protecting a major drug trafficker.
The convictions were secured despite allegations that a prosecutor offered to help the defence in exchange for more than $400,000, senior police officials told AP.
The United States has spent $5.5bn in mostly military aid to the country over the last seven years as it struggles to combat a bloody civil conflict between the security forces, Farc rebels and right-wing paramilitaries.
But US Democratic congressional members are blocking a free trade deal and have threatened to reduce aid over concerns that the Colombian army is abusing human rights.
Source : News Agencies 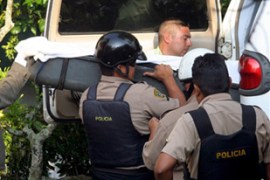 Man wanted by the US found shot dead at Venezuelan hotel. 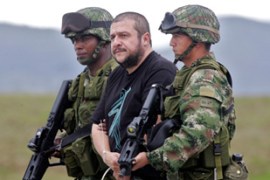 Diego Montoya and Carlos Jimenez being moved to “prison boats” for security reasons.