But on the eve of Rice’s visit, Kenya’s foreign minister had strong words for anyone trying to force a deal on the government.

“We encourage our friends to support us and not make any mistake of putting a gun to anybody’s head and saying ‘either/or’, because that cannot work,” Moses Wetangula said.

“Even if we get visitors to help us in any way possible, the answer to the problem in Kenya lies with Kenyans themselves.”

Bush, who is on the second leg of a five-nation Africa tour, says Washington wants to help the talks, not dictate a solution.

Reinforcing that, a White House spokeswoman said Rice did not expect to come away with a final deal, nor would she offer incentives to encourage the feuding sides to strike a pact.

“But I do think … they are inching their ways closer and they need a little bit of help to get there,” she said. 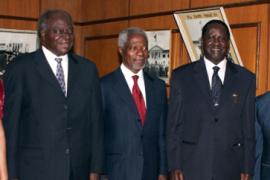 Kibaki’s government has been wary of what it views as foreign meddling in the country’s affairs. Meanwhile Odinga says Kibaki stole the election that took place on December 27.

Although Annan reported considerable progress in last week’s talks – including agreement on an independent review of the disputed poll – most Kenyans are waiting for a breakthrough on the contentious “grand coalition” idea he has advocated.

Government officials have said the only power-sharing being considered is giving opposition members top jobs in ministries in Kibaki’s cabinet.

But that proposal is unlikely to satisfy the opposition when talks resume on Tuesday.

In an interview published on Monday, the man who blew the whistle on one of Kenya‘s biggest graft scandals said deeper issues like perceived tribal inequalities in land rights, power and wealth needed to be addressed.

“The elections were merely a trigger for the crisis, with the subsequent mayhem simply symptomatic of a wider leadership failure,” John Githongo, the exiled former anti-corruption adviser to Kibaki, told a Kenyan newspaper.

“This will not change and we should not pretend it will. Putting all the belligerents into one government merely buys time. We need to be prepared to think outside the box.”

Githongo quit Kenya in early 2005 after he revealed details of a scandal in which state contracts worth hundreds of millions of dollars were awarded to phantom firms. 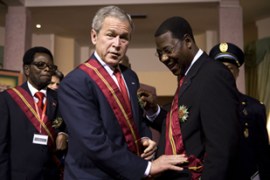 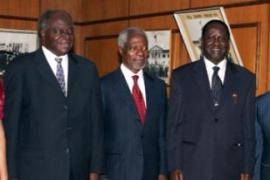 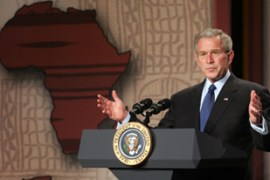 Bush wants Rice to demand an immediate end to fighting in the East African nation.

Negotiations on power-sharing agreement will resume in Nairobi on Monday.