Opposition protest
Robert Kocharian, the outgoing president, had chosen him as his successor after Sarkisian’s Republican Party of Armenia swept parliamentary elections in May last year.
Opinion polls had showed Sarkisian well ahead of his eight rivals in the race to replace president Kocharian – who is constitutionally barred from running for a third five-year term.

Sarkisian’s two main rivals, Ter-Petrosian and Artur Baghdasarian, a former parliamentary speaker, boosted the prime minister’s chances by failing to unite ahead of the vote.

Opponents accuse the Sarkisian camp of making unfair use of state resources to promote his candidacy, a charge the prime minister has denied.

Armenia’s opposition said it would hold a rally on Wednesday to protest against what it termed serious violations in Tuesday’s presidential election.

Arman Musinyan, a spokesman at the campaign headquarters of Ter-Petrosian, said: “There were very serious violations during voting, including ballot-stuffing, kidnapping and the beating of our representatives at the polling stations.

“We’ll definitely hold a rally in the centre of Yerevan tomorrow.”

Pre-election polls showed Sarkisian hovering at about 50 per cent support, with Ter-Petrosian and Baghdasarian trailing with between 10 and 15 per cent.

About 600 foreign observers are to monitor the vote and analysts say the government is keen to win international legitimacy for the result.

The Organisation for Security and Cooperation in Europe is to issue a report on the election on Wednesday.

Parliamentary elections last May were the first to be declared largely in accordance with international standards.

Speaking to tens of thousands of supporters at a rally on Sunday, Sarkisian, 53, said his government was the only one voters could trust to maintain economic growth.

“I know there are many problems in our country – poverty, unemployment, corruption. We are the only political force that knows how to resolve these problems,” he said. 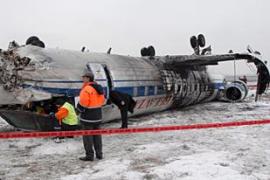 At least 10 people injured as plane flips over on runway as it takes off.