Jerusalem
Olmert said Abbas had agreed to postpone talks on the future of Jerusalem until the end of the negotiating process, a move that could anger Palestinians but help Olmert hold together his fragile coalition government for now.
Olmert said he hoped to be able to sign an “understanding” with Abbas before the end of 2008 that would cover the “basic principles” for statehood, including borders, the fate of Palestinian refugees, as well as Jerusalem.
His comments appeared to run counter to those made by George Bush, the US president, last month in a visit to the occupied West Bank.
Bush set the goal of trying to get both sides to sign a “peace treaty” before his term ends next January, although he did not spell out what that might entail.
Olmert’s government has already lost one of its right-wing coalition partners over the peace talks.
The ultra-religious Shas party has also threatened to bolt if the talks focus on Jerusalem.
“I don’t know if we will be able to reach an understanding with the Palestinians. I hope we will. We’ll do everything in our power to. But we will not start with the issue which is the most difficult,” Olmert said of Jerusalem.
“We will postpone dealing with Jerusalem to the last phase of the negotiations,” Olmert said, stressing that Abbas had “accepted” his suggestion.
‘Free hand’ for army
Israel asserts that it can maintain parallel tracks with the Palestinians, one aimed at reaching a statehood agreement with Abbas and the other at breaking Hamas’s hold on the Gaza Strip.
Olmert has so far been wary of launching a major ground operation in Gaza, which Hamas seized by force in June after routing Abbas’s Fatah faction.
But the Israeli leader faces growing domestic pressure to act against the rocket salvoes, especially after Hamas claimed responsibility for a suicide bombing that killed a woman and a rocket attack that cost an 8-year-old boy part of his leg.
Some members of his cabinet have urged the army to assassinate Hamas’s political leaders.
“We have completely a free hand to respond, to reach out and to attack everyone [who has] any kind of responsibility on behalf of Hamas,” Olmert said.
“That applies to everyone, first and foremost Hamas.”
Israeli forces killed three Palestinian fighters and a civilian during a ground operation in the Gaza Strip on Sunday. At least seven others were injured, medical workers said.
Israeli air strikes and ground incursions into the coastal territory have killed some 300 Palestinians in the past year, including dozens of civilians, but failed to stop rocket fire, which killed two Israelis in the same time period.
Ahead of a planned meeting between Olmert and Abbas in Jerusalem on Tuesday, Bernard Kouchner, the visiting French foreign minister, warned that he saw no real sign of progress since a US-sponsored peace conference in November re-launched the statehood negotiations, and called the situation dangerous.
Palestinian leaders have voiced increasing frustration that Israel has yet to meet its commitments under a 2003 road map peace plan that calls for halting all Jewish settlement activity and for uprooting outposts built without government authorisation in the occupied West Bank.
Israeli leaders say the Palestinians have yet to fulfil their own road map commitment to rein in fighters, including those in the Gaza Strip.
Source: News Agencies 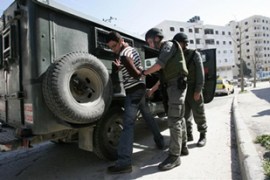 Israeli troops kill four Palestinians and wound seven others in the town of Rafah.