Another earlier attack, on the Guyana Police Headquarters, also left two policeman injured.
‘Brutish beasts’
Leslie Ramsammy, the Guyanese health minister, described those who carried out the latest attack as “brutish beasts”.
“This is more than horrific,” he was quoted by AP as saying.
Witnesses told the AFP news agency that at least five civilians were ordered to lay face down on the ferry before they were shot and killed.

“Not a man is on the street. The area is deserted.”
State television said police and soldiers were deployed to track down the attackers.
The violence is reportedly unusual in Bartica, a town by the Essequibo river often used by amateur miners before they head to remote diamond and gold fields near the border with Venezuela.
The earlier attacks sparked angry protests and concerns of renewed ethic tensions between Guyanese of Indian and African descent in the
former British colony.
Police say it is too early to say if the incidents were connected.
Most wanted
The previous attacks have been blamed on alleged gang leader Rondell Rawlins – the country’s most wanted man.
Rawlins, who had been suspected of involvement in the 2006 assassination of Satyadeo Sawh, Guyana’s agricultural minister, has reportedly claimed responsibility for those attacks.
He has also threatened more unless his pregnant girlfriend, who went missing last month, is found.
Authorities issued an arrest warrant last week for a suspected organised crime leader whom they believe has kidnapped her, AP reported.
They have also offered a $250,000 reward for information leading to Rawlins’ capture.
Source: News Agencies 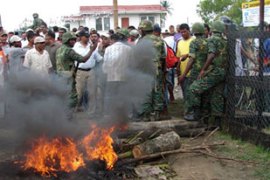