Iraq produces about 2.3 million barrels of oil a day, a fraction of its 115 billion barrels of verified crude oil reserves, surpassed only by Saudi Arabia and Iran.
Some oil companies have already signed deals with the largely autonomous northern Kurdistan region.
The move has angered the government in Baghdad, which has threatened to blacklist them and declare the deals illegal.
Prominent bidders
Firms from Europe, Asia and America are among those who have registered to bid for Iraqi oil contracts, Jihad said.
Shell and Repsol YPF, the Spanish energy company, are among those that have said they have registered.
Despite the oil tender, a law that could clear the way for investment in its oil fields is deadlocked by a battle for control of the reserves and no end to the impasse is in sight, legislators and officials say.
The bill is also meant to share revenue equitably from the world’s third largest oil reserves, thus helping bridge the deep divides between Shias, Sunni Arabs and Kurds.

In other news from Iraq on Monday, Katyusha rockets struck Baghdad’s international airport and an adjoining US military base, killing five civilians and wounding 16, including two US soldiers, officials and witnesses said.
The deaths and injuries of the civilians occurred inside a workers’ housing complex within the perimeter of the airport, residents said.
“Eight Iraqis, including six children, were taken to a coalition force medical clinic for treatment,” the US military said in a statement.
It said rockets also struck areas of Camp Victory US military base adjoining the airport.
Six suspects were arrested in the wake of the  attack, the military said.
Source: News Agencies 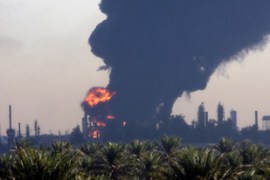