In September 2001, Canada became the first Nato nation to rally to America’s defence by invoking the alliance’s Article 5 – a commitment to stand by a member when attacked – and yet seven years after its troops first went to Afghanistan, its early resolve is wavering.

Canada is having trouble engaging its Nato allies, and equally importantly, a sceptical population is not onside. The ante was upped last month when a blue-ribbon expert panel recommended that the government extend the current term of the Canadian deployment beyond February 2008 only if Nato can guarantee 1,000 more troops in the area around Kandahar.

Since then, the prime minister has been making calls to his Nato partners reminding them that the alliance must share the burden of Afghanistan equitably.

Even as Canada steps up diplomatic pressure in the run up to a summit that is seen as a make or break event for the alliance, in Bucharest next April, the mission is proving to be a hard-sell on the domestic front as well.

While 86 per cent of Canadians said in a recent poll that their country “can have a positive impact on world affairs by serving as a role model to other countries,” less than half of the population sees the logic of sticking it out in Afghanistan.

How Canadian troops landed themselves with the hottest job going in Afghanistan has become a topic of debate in recent months. In hindsight, it is clear that Canada ramped up its troop strength and chose to go to the crucible of Kandahar to duck the US invitation to accompany its forces into Iraq.

It initially seemed as if Afghanistan provided exactly the sort of purpose that this G-8 nation was seeking in the 21st century – a laboratory for peacekeeping, nation-building and good governance, traditional Canadian fortés, with the promise of success in a reasonable timeframe. Unlike Iraq, Afghanistan was an international consensus.

But, 79 deaths down, Canadians remain unconvinced. Translating good intentions and millions of dollars in aid into tangible progress on the ground and “success” – however defined – has proved elusive.

The instinct is to pack up and leave, but as the government has been insisting in recent weeks, such a pullout would mean undoing the enormous investment in money and lives that Canadians have already poured into Afghanistan. It is a conundrum that defies easy understanding.

At the heart of this conundrum lies the tension between domestic public opinion and a national government’s desire to heed its internationalist impulses. Angela Merkel, the German Chancellor, knows this tension only too well.

She has come down every time on the side of caution as she tries to balance her country’s repositioned international profile with a mission that is increasingly seen by her domestic voters as all-out war rather than peacekeeping or nation building.

If that means that Germany gets lumped as a “free rider” with other allies who refuse to take on more of a combat role, so be it.

On the eve of her surprise visit to Kabul on Thursday, Condoleezza Rice, the US Secretary of State, appeared to grasp a fundamental truth: “Our populations need to understand this is not a peacekeeping mission. This is a counterinsurgency problem and that’s different.”

When citizens confuse peacekeeping with peacemaking, the consequences can be the political equivalent of harakiri – ritual suicide. Unlike her own president, few leaders are willing to risk their office to the vagaries of a redemptive mission on another continent.

This was evident in Vilnius, where Nato defence ministers were meeting Thursday in preparation for the April summit. Canada stayed on the offensive, insisting that its call for sharing the burden in the south of Afghanistan is “non-negotiable”.

In response, Hervé Morin, the French defence minister, sounded an optimistic note when he appealed over the heads of his colleagues to the people of Canada: “My message to the Canadian public is: be a bit patient.”

Monsieur Morin realizes that in the final analysis it is the Canadian people who will decide whether their troops will stay in Afghanistan, not their government or Nato.

Even if Nato can meet the Canadian request, there are two other factors at play that make the Afghan mission a political landmine: the experience in Kosovo and the treatment of Afghan prisoners.

As James Bissett, a former Canadian ambassador to Yugoslavia, has argued, “[A]fter eight years of occupation, Nato and the UN have proved incapable of bringing law and order (in Kosovo). In other words, they have made a mess of it.”

In his opinion, Afghanistan with a much larger population (at 32 million people, it has as many people as Canada) and land area, the chances of success are even more remote.

Moreover, when progress is judged in small incremental steps as mundane as new wells dug and girls going to school, there is impatience over the glacial pace. There are no easy photo-ops to demonstrate progress, nor are there any “signature” events that speak to how far Afghanistan has come.

Nowhere is the frustration more evident than in the case of persistent reports of prisoner abuse, including those transferred to the Afghan authorities by Canadian forces. Both Amnesty International Canada and the British Columbia Civil Liberties Association have gone to court arguing that this country’s Charter protections apply to these prisoners and prison camps run by Canada.

Government lawyers have responded by asserting that the Canadian “Charter rarely applies extra-territorially and only when Canada exercises control over territory.”

However, Canadian troops have stopped handing over prisoners captured since November after a “credible” case of abuse came to light.

The government recognizes that doing anything less would leave Canada vulnerable to the charge of abetting a practice that would be unconstitutional within its own territory. That would be hard to swallow for the average Canadian voter who sees the Afghan mission as one of compassion.

As Nato leans hard on members who have been missing in action in Afghanistan, Canada finds itself rather uncharacteristically on the frontlines alongside the British, American and the Dutch.

What started out as an attempt to stand shoulder to shoulder with a wounded southern neighbour has metastasised into something entirely different: A battle to save Nato from its complacency.

The writer is Contributing Editor of Diplomat and International Canada, published from Ottawa. 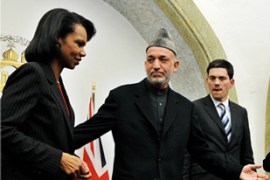 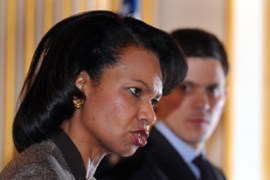 Rice and Miliband in Afghan visit

Surprise tour comes as US and UK call for more Nato troops in Afghanistan.