“It’s hard to expect that all the problems will be removed today and that all disagreements will be solved.”

Kupriyanov later said that the cut off time had been pushed back eight hours to 6pm (1500 GMT) on Tuesday, an indication that the sides might be approaching an agreement.

Gazprom said that it would only cut Russian-origin gas and that its contracts with customers further downstream would be fulfilled.

A repeat of supply disruptions to Europe would renew Western concern about Russia’s reliability as an energy partner, even as it undertakes massive new projects to sell gas to Europe.

Kupriyanov did not comment on the claim hours earlier by Yulia Tymoshenko, Ukraine’s prime minister, that Russia had promised there would be no cut off, but his statement that gas would be cut off on Tuesday appeared to contradict her remarks.

Although Gazprom insists its ultimatum is strictly a commercial matter, the cut off would coincide with an official visit by Viktor Yushchenko, Ukraine’s president, to Moscow on Tuesday.

European supplies were affected in 2006 during a price dispute between Kiev and Moscow which was seen as rooted in the Russia’s unhappiness that that the pro-Western Yushchenko who had come to power a year earlier.

Moscow has recently been angered by Ukraine’s renewed drive to seek membership of Nato and the EU in a move to move away from Russia’s sphere of influence.

Kupriyanov said on Monday that Gazprom would be willing to negotiate direct sales to Ukraine, once the current dispute is resolved.

He said Ukraine currently gets about one-fourth of its gas imports from Russia.

However, Alexander Burgansky, an energy analyst with the Renaissance Capital investment bank, said a Central Asian cold snap is easing and that “Ukraine may not even need [Russian gas] anymore.”

Byrgansky said Ukraine was unlikely to be affected by a Russian cut off, but Oleh Dubina, the head of Ukraine’s natural gas company Naftogaz, said recently that the country had no gas reserves and might be forced to “stretch out our hand and beg”. 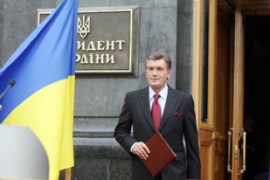