China’s foreign ministry summoned Herve Ladsous, the French ambassador, to strongly protest against Saturday’s 30 minute meeting between Nicolas Sarkozy and the Dalai Lama in the Polish city of Gdansk, on the sidelines of a gathering of Nobel Peace prize winners.

Beijing said the meeting was an “unwise move” and warned of broader damage to relations with the European Union, of which France holds the rotating presidency.

China had earlier pulled out of its 11th summit with the EU over the meeting.

“This wrong action harmed the bilateral political trust, all round co-operation, and bright future, hard won in the 45-year establishment of Sino-French relationship,” He said.

Liu Jianchao, a Chinese foreign ministry spokesman, said it was up to France to repair ties.

Sarkozy said the private meeting posed no threat to Beijing, but he defended his right to set his own agenda and also said there was “no need to dramatise things”.
Bernard Kouchner, the French foreign minister, had said before the meeting that “we cannot have France’s conduct dictated to, even by our friends”.

Christine Lagarde, the economy minister, had earlier stressed that economic relations should be spared from reprisals.

“There are many French businesses working in China and I believe that it is in everyone’s interest that this relationship continues, despite what China considers to be a minor incident,” she said.

However, some in China’s online community have already called for a boycott of French goods.

“I am going to boycott French goods for my whole life. I will never use French brands or any product made in France,” said one internet user, who identified himself as Yan Zhongjie.

Angry Chinese boycotted French products after pro-Tibet protests in April marred the Olympic torch relay in Paris and Sarkozy threatened to stay away from the opening ceremonies of the Beijing Olympics.

The French leader in the end attended the Olympics ceremony and
sent his wife, Carla Bruni-Sarkozy, and Kouchner to meet the Dalai Lama when he visited France in August.

China has argued that the Dalai Lama is seeking full independence, something the Tibetan spiritual leader in exile dismissed on Friday as “totally baseless”.

Addressing the European parliament in Brussels on Thursday, he said China lacked the moral authority to be a true superpower. 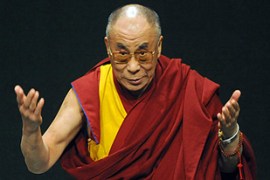