Only a few navies can actually catch and try suspects and EU nations are not allowed to turn over suspects to countries where they might face the death penalty.

“The EU is reviewing agreements whereby suspects could be taken by third countries that are willing and in a position to launch criminal proceedings,” Frank-Walter Steinmeier, the German foreign minister, said on German public broadcaster ZDF.

“Moreover we are in favour of reviewing whether the United Nations could use existing international courts or found a new one to conduct such criminal proceedings,” he said.

The EU mission will patrol an area of around one million square kilometres and critics have questioned whether the mission will serve any meaningful purpose.

Some argue that the only way to combat piracy is to start the battle on land, in war-torn Somalia.

For a year, vessels from at least eight countries – Belgium, the UK, France, Germany, Greece, the Netherlands, Spain and Sweden – will escort aid ships.

The mission will be headed by Admiral Phillip Jones, a British officer, and will be headquartered in Northwood near London.

The fleet will initially be led off the coast of Somalia by Greece’s Admiral Antonios Popaioannou, with a Spaniard and then a Dutch officer taking over after three month terms.

Nearly 100 ships in the Indian Ocean have been attacked by pirates this year.

On Saturday, pirates fired a rocket-propelled grenade at the a Dutch-operated vessel in an attack east of Tanzanian capital Dar Es Salaam, the International Maritime Bureau said.

Choong said the pirate attacks were spreading southwards from the waters around Somalia.

“Pirates have become bolder and more dangerous. They are also firing automatic weapons and rockets indiscriminately.”

The deployment of the EU mission comes as negotiations continued for the return of two of the biggest prizes captured by the pirates, the Ukrainian arms carrier MV Faina and the Saudi supertanker Sirius Star.

Somali pirates holding the MV Faina have accused the owners of stalling on a ransom payment and threatened to pull out of a deal for its release.

A pirate spokesman was quoted by the AFP news agency as saying that the armed gang holding the ship was unhappy about the delay in the ransom payment.

“The ship’s owners are taking too long to hand over the money,” the spokesman, identifying himself only as Ahmed, said by telephone from Hobyo town, near the pirate’s base in Harardhere.

“There have been consultations between the force on the ground and on the ship and everyone agreed that if the money is not delivered on time, to abandon the agreement,” he said.

Elders in the area who did not wish to be named said a ransom of $3.5m had been agreed for the ship, carrying 33 Soviet-type battle tanks, rocket launchers and ammunition when it was seized off Somalia two months ago. 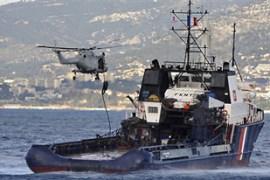 Vessel release follows UN approval of use of military force against pirates. 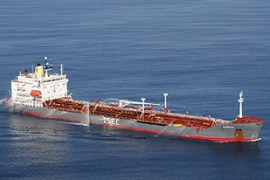 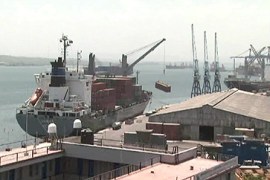 High ransoms are encouraging the pirates to extend their area of attack.