Ryanair called the disruption an “unacceptable breach of security and management failure” at the airport and called for an inquiry.

In a statement, the airline said: “Ryanair will be calling for an investigation as to why the BAA have once again failed to keep Stansted airport secure and open to the travelling public.”

“It is unacceptable that the travel plans of thousands of passengers have been disrupted because BAA Stansted security have failed to remove a number of protesters.”

BAA, a subsidiary of Spanish infrastructure group Ferrovial, has requested planning permission to add a second runway at Stansted and won government permission in October to increase the airport’s flight capacity by 10 per cent.

Ian Gruneberg, Stansted divisional police commander, said it was a concern that the protesters had been able to penetrate the airport’s security by cutting through perimeter fencing.

“It is a matter we will be reviewing with the airport later to see what we can learn from it to see if we can make it more difficult next time,” he said.

An airport spokesperson said it would be investigating the security breach and “where there are lessons to learn we will do so”.

Lily Kember, a protester on the runway, said before her arrest that the group’s action would stop tonnes of carbon dioxide being released into the atmosphere.

“Climate change is going to affect everybody, it’s a global catastrophe in the making and we need to take action now,” she said. 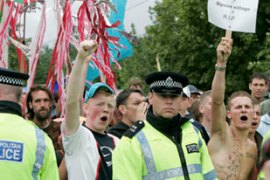 About 200 demonstrators gather at the offices of the British Airports Authority.