“We found six bodies buried under the debris of two destroyed hotels and one adjoining house. Among the dead was a 12-year-old boy and a woman,” Noor Mohammad, another local police official, said.

“The powerful blast brought down several buildings and destroyed over 50 vehicles.”

Television footage showed survivors frantically carrying bloodied victims through the rubble to private cars and ambulances as firefighters sought to douse the flames.

Some witnesses said the explosion ripped open a natural gas pipeline, creating a blaze that spread to nearby buildings and shops.

“The fire broke out again Saturday morning and firefighters were called in to put it down,” said Mohammad Khalil, whose shop was gutted by the flames.

Neither the motive nor the culprits behind the blast were clear, but Haider Khan Hoti, the head of the NWFP government, said it was possible that “external forces” could be to blame.

Zaffar Abbas, the Islamabad editor of Pakistan’s Dawn newspaper, told Al Jazeera: “This was different in the sense that it was carried out in a public place, rather than any of the security forces being the target.

“That is where the speculation is that it could be external forces.”

“The reason for that is that the Taliban and al-Qaeda have a major fight on their hands in Afghanistan and therefore more and more people here are inclined to believe that what is happening on the Pakistan side has a foreign dimension to it,” he said.

“There is also a considerable anger in this city – as well as the country – after allegations were hurled at Pakistan for what happened in Mumbai.”

The Peshawar bombing was the second blast in a Shia area in the northwest of the country on Friday.

Further adding to concerns about “external forces”, a suspected US missile attack reportedly killed three people in a stronghold of the Taliban and al-Qaeda near the border with Afghanistan.

In another development, Pakistan’s Dawn daily reported on Saturday that the country’s security forces had been put on high alert after a hoax caller pretending to be India’s foreign minister contacted Asif Ali Zardari, the Pakistani president.

The incident occurred on November 28, two days after the co-ordinated attacks on Mumbai, the Indian financial capital.

The caller ignored Zardari’s conciliatory language and directly threatened to take military action if Pakistan failed to act immediately against the supposed perpetrators of the slaughter in Mumbai.

Throughout the next 24 hours Pakistan’s air force was put on “highest alert” as the military watched anxiously for any sign of Indian aggression, the report said.

Dawn’s Abbas told Al Jazeera: “To some extent there was an escalation in tension. There was a bit of panic in Islamabad. The security forces started to assess the whole situation and some drills were carried out.

“But to say the war was imminent is a bit of a exaggeration because there are still two lines of communication between the two countries.

Pakistani officials said the caller ID was a New Delhi number, and some believe the call was made from India’s external affair’s ministry.

But Indian officials have denied this to US counterparts and maintained that the number could have been manipulated, Dawn reported. 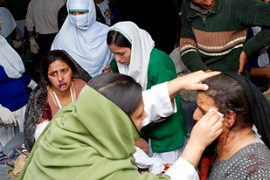 At least 20 dead and scores injured in blast near Shia mosque in northwest Pakistan. 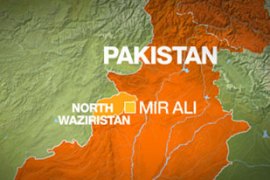 Pakistani officials say the missile targetted a house of a suspected Taliban fighter. 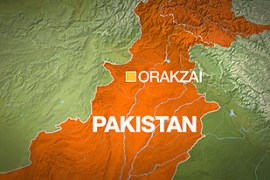