Mukherjee said in a statement that the call – of which he had been notified by a third country – was a hoax.

“I can only ascribe this series of events to those in Pakistan who wish to divert attention from the fact that a terrorist group, operating from the Pakistani territory, planned and launched a ghastly attack on Mumbai,” he said.

“It is, however, worrying that a neighbouring state might even consider acting on the basis of such a hoax call, try to give it credibility with other states, and confuse the public by releasing the story in part.”

He did not name the third party, but Dawn said the caller was Condoleezza Rice, the US secretary of state, who was in both capitals last week to ease tensions.

New Delhi has demanded Islamabad take action over what it says is the latest anti-India attack emanating from Pakistani soil.

At least 171 people were killed during the three-day assault last week across India’s financial capital, which has harmed the improving ties between the south Asian nuclear rivals.

Islamabad denies any involvement in the incident, but some of the attackers are said to have had links to Pakistan.

Nine of the 10 men believed to have mounted the attack on 26 November died.

Mumbai police have said the attackers were controlled by the Pakistan-based Lashkar-e-Taiba group, which has fought Indian control of divided Kashmir and was blamed for a 2001 attack on the Indian parliament, which brought the two countries to the brink of war.

Rakesh Maria, the chief police investigator, told the Associated Press news agency that the captured attacker, Azam Amir Qasab, had been indoctrinated by Lashkar operatives. The group has denied involvement.

Maria said that Qasab had been a low-level thief before going to a camp run by the Lashkar.

“The moment he came under their wings, the indoctrination started. And that’s when he decided there should be some meaning to his life and jihad was his calling,” Maria said. 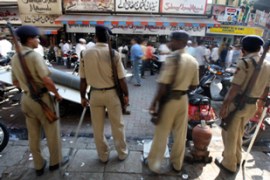