“No matter how important the autos are to our economy, we don’t want to put good money after bad,” Bush told US television station NBC.

“In other words, we want to make sure that the plan they develop is one that ensures their long-term viability for the sake of the taxpayer.”

GM has asked congress for $18bn, including $4bn by the end of December to avoid collapse, while Chrysler sought $7bn, also by the end of the month.

Ford said it was seeking $9bn in credit as insurance against any potential difficulties.

The three executives travelled by car this time, two weeks after a botched bid for aid that included criticism for flying to Washington in private jets.

Congress had told the companies then to draft more detailed plans before they would consider a bailout.

“I can tell you in my 38 years in business, I’ve never attended a more important session where more is reliant upon both the house and the senate,” he said.

Alan Mulally, the president of Ford, a company once synonymous with US industrial might, told the committee: “I have thought a great deal about the concerns you expressed. I want you to know I heard your message loud and clear.”

Al Jazeera’s Nick Spicer, reporting from Washington, said the continuing decline of the US economy was increasing the pressure on the politicians to agree to a deal.

Democrats want the White House to use the already approved $700bn bailout of the finance industry to rescue the car makers.

Chris Dodd, the Senate Banking Committee chairman, said a failure to take action would amount to playing “Russian roulette” with the US economy.

“We need to act, not for the purpose of protecting a handful of companies. If that were the extent of the issue – I would let them fail.

“Inaction is no solution.”

But the committee’s top Republican, Richard Shelby, who opposes the bailout, questioned the companies’ restructuring plans and asked whether they were ready to use the crisis as an opportunity to change.

The Bush administration has insisted that the money should come from a $25bn stream of loans designed to help the manufacturers produce more fuel-efficient vehicles.

The White House said on Thursday that the administration wanted to hear their testimony to congress first.

“I think it’s too early to give these plans a grade,” Dana Perino, a White House spokeswoman, said.

“I also think that since the Democratic leadership invited the automakers to come to Washington to testify in front of them today and tomorrow, that we should then allow them to do that before passing any judgment on their plans.”

On Wednesday, the United Auto Workers union said it was willing to make concessions to help secure a government bailout.

But the union has also been criticised for demanding large contract buy-out packages for workers.

Detroit-based firms to reveal restructuring plans to US congress as crisis continues. 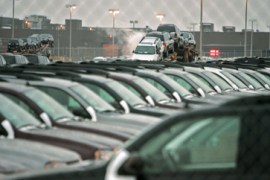