At least 171 people were killed and more than 300 injured last week in attacks against hotels, restaurants and other public spaces.

Many of those at the vigil say that neighbouring Pakistan is responsible for the attacks.

The Indian government has demanded that Islamabad hand over 20 people suspected of involvement in the assaults.

As the remembrance event went ahead, the head of the country’s counter-terrorism force said that Mumbai police had found and defused two bombs.

The explosives were found hidden in a bag at the Chhatrapati Shivaji railway station on Wednesday, a week after it came under deadly attack by armed men who also targeted several other buildings in the city.

While searching 150 bags at the station, police found one that looked suspicious and called the bomb squad. They found two bombs of 4kg each inside and defused them, police said.

“This is part of the same consignment which the terrorists had brought on Wednesday night [a week ago] when they were attacking and running helter-skelter, some of the material had been left behind,” KP Raghuvashi, India’s counter-terrorism chief, said.

Relations between India and Pakistan have been brought into sharp focus since the Mumbai attacks, with New Delhi accusing Pakistani individuals of being involved in the assaults.

The chairman of the US joint chiefs of staff called on Pakistan’s government to work harder against armed groups, during a visit to the capital Islamabad on Wednesday.

Admiral Mike Mullen urged Pakistani officials to “investigate aggressively any and all possible ties to groups in Pakistan” and “take more, and more concerted, action against militant extremists elsewhere in the country”.

Earlier on Wednesday, Condoleezza Rice, the US secretary of state, called on Pakistan to give its “full co-operation” in finding those responsible for last week’s deadly attacks.

Rice made the comments after arriving in New Delhi for talks aimed at easing tensions between India and Pakistan.

She made it clear to Asif Ali Zardari, Pakistan’s president, that there must be complete transparency in the investigation into the attacks.

Matt McClure, Al Jazeera’s correspondent in Indian capital New Delhi, said: “The secretary of state is going to be urging a lowering of the level of rhetoric that has been travelling back and forth between these two nuclear rivals in the past few days.”

Earlier, speaking in London, Rice declined to comment on reports that a Pakistan-based group could be behind the co-ordinated attacks on two luxury hotels, a railway station and a Jewish centre.

“I don’t want to jump to any conclusions myself on this, but I do think that this is the time for a complete, absolute, total transparency and co-operation and that is what we expect,” she said.

Indian investigators have said the attacks were carried out by Lashkar-e-Taiba, a Pakistan-linked group which opposes Indian rule in divided Kashmir.

India believes some of the 20 had links to other attacks in India, most notably the attacks on parliament and commuter trains.

Pakistan has said it will “look at” the list of names and “frame a response”.

Mukherjee also said that New Delhi is  not considering military action in response to the latest attacks in Mumbai.

“Nobody is talking of military action,” Mukherjee said when asked about options on what action could be taken.

“We have no intention of not carrying out the peace process,” he told the Indian news channel NDTV.

India’s foreign ministry has said that New Delhi summoned Pakistan’s high commissioner to inform him “that the recent terrorist attack on Mumbai was carried out by elements from Pakistan”.

But Pakistan’s government denies any links.

“The target of this terrorist act was not just India. It was also Pakistan’s fledgling democracy, and the India/Pakistan peace process,” Husain Haqqani, Pakistan’s ambassador to the US, told The Associated Press news agency. 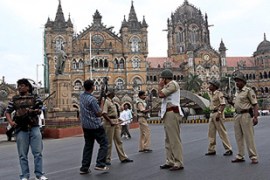 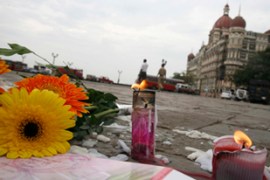