Abbas, who had been criticised for blaming rival faction Hamas for provoking the Israeli attacks, and accused of colluding with Israel over the operations on Gaza, said he “would not hesitate to put negotiations to an end if they come into conflict with our interests”.

“Peace does not mean humiliation or surrender,” he said in the recorded address. “Our people are still equipped with more options.”

Ehud Olmert, the Israeli prime minister was quoted as saying earlier on Wednesday: “If conditions ripen and we think there will be a diplomatic solution that will ensure a better security reality in the south, we will consider it.

Israel’s security cabinet met on Wednesday to discuss the proposal made by France, which holds the rotating presidency of the European Union, for a 48-hour truce to allow for the passage of humanitarian aid into the besieged territory.

Mark Regev, an Israeli government spokesman, said a “durable” solution was needed rather than the “band-aid” that would be provided by a 48-hour truce.

“What we need is a solution that will create real quiet … the only people who really wanted this were Hamas, because we have been hitting them hard and they’d like time to regroup and rearm,” he told Al Jazeera.

Israel has targeted many of the underground tunnels leading out of Gaza into Egypt, which have been a lifeline to Palestinians for food, fuel and medical supplies since Israel closed Gaza’s border crossings 18 months ago.

Furthermore, Israel’s military has been moving soldiers, tanks and armoured personnel carriers to Gaza’s edge amid ongoing concerns that the aerial assault will be followed by a ground offensive.

The Arab League on Wednesday requested that Switzerland convene a conference to examine possible breaches to the Fourth Geneva Convention of 1949 committed by Israel.

More than 20 Arab foreign ministers at the summit in Cairo said they held Israel responsible for the violence in Gaza, and responsible for lifting the siege and reopening the border crossings.

The League will also approach the UN Security Council to secure condemnation of the Israeli offensive, which has scheduled a meeting on the Middle East for Wednesday evening, according to UN spokesman.

Hamas said on Wednesday that it would fight “until the last breath” if Israel sent ground forces into Gaza.

“Israel will embark on a veritable adventure if it decides to invade Gaza. We have prepared surprises for them,” Mushir al-Masri, a senior Hamas official, said.

Ayman Mohyeldin, Al Jazeera’s correspondent in Gaza, said that in the event of a ground incursion, Palestinian factions felt that they had the advantage, due to the preparations they have made over the past six months of the truce.

“They say they have acquired new weapons, new munitions, new explosive devices and this is where they feel they enjoy more of an advantage in terms of the ability to face an Israeli incursion,” he said.

“They certainly know they can’t compete with Israel’s air superiority and that is why Israel has been warned against launching a [ground] operation here in Gaza.”

Abbas said that the Arab Peace Initiative, drawn up in 2002, calling for an Israeli withdrawal from the occupied Palestinian territories in exchange for peace with all Arab nations, would be the cornerstone in settling the conflict.

He added that his priority was to “restore harmony and unity through internal dialogue” in the speech, which marked the 44th anniversary for the founding of his Fatah movement.

Nour Odeh, Al Jazeera’s correspondent in Ramallah, said Abbas tried to show that his condemnation of Israel was absolute and that he stands with the Palestinian people as one, warning Israel and the wider international community that Palestinians have more options than just dialogue.

“Our people will not be out of choices if negotiations fail. Our people have the power to confront the war and aggression, the settlement activity, and the apartheid wall. This is the key to our victory.”

Ghassan al-Khatib, a Palestinian analyst, told Al Jazeera that a significant point of Abbas’ speech was that he avoided placing any blame on Hamas.

Mohyeldin added that calls for national unity have been on the top of the list for Palestinians for a while.

“Other Palestinian factions have come out in the past few day and urged Hamas and Fatah to put aside their differences and try to build a national conciliation agreement that would allow them to join together and share power and put the interests of the Palestinians above all.

“At the end of the day, they think, the two factions have lost what is in the best interest of the Palestinian people, and that is certainly the most frustrating thing for them.” 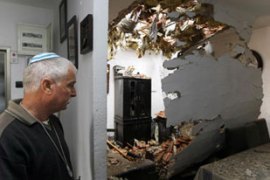 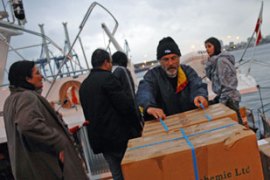 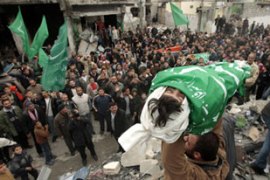 Israel in ‘all-out war’ with Hamas