Van Rompuy was expected to take over his predecessor’s plan for battling a
looming recession caused by the global financial crisis.

He will also have to handle the strained relations between Flanders, Belgium’s richer, more populous Dutch-speaking region, and its Francophone area.

“Nothing is simple in our country, but what is important is that we have a government to lead with seriousness, stability and serenity,” said Elio di Rupo, the leader of the Francophone Socialist party.

Van Rompuy will be the third prime minister since general elections in June 2007 in the linguistically divided country that is host to the main European Union institutions and to Nato.

Belgium is expected to have slipped into recession in the fourth quarter and large banks have received bailouts. Fighting the economic downturn will be Reynders’ main challenge.

Van Rompuy, 61, has the reputation of being both an intellectual and a budgetary hardliner.

He was budget minister from 1993 to 1999 and sharply reduced public debt in his first year in office.

His other task will be to sort out the Fortis debacle.

The bank’s shareholders won an appeal court ruling this month, freezing the group’s break-up by the Dutch, Luxembourg and Belgian governments and the latter’s sale of Fortis assets to BNP Paribas.

That government collapsed after the supreme court said there were clear indications of political meddling in a court ruling over the bailout of Fortis. 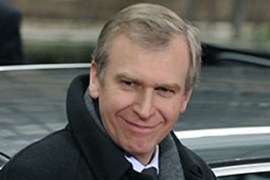 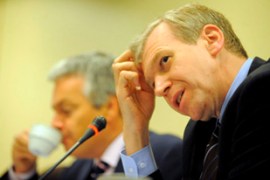