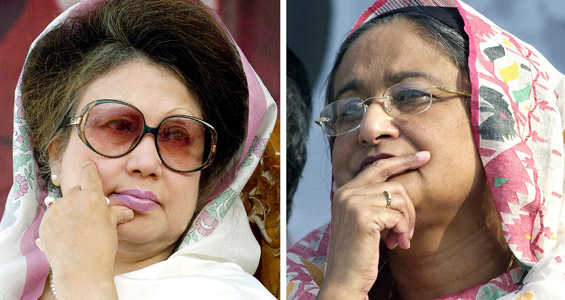 Bangladesh goes to the polls on Monday with two former prime ministers fighting in what is a restoration of democracy after two years of an army-backed government.

Sheikh Hasina Wajed, leader of the Awami League, and Khaleda Zia, leader of the Bangladesh Nationalist Party – from opposing political dynasties – were jailed for a year on corruption charges by the current regime, but deals have seen them released from custody to ensure they take part in Monday’s vote.

Al Jazeera has exclusive interviews – the first by any foreign media – with the “battling begums”.

Khaleda Zia: “I have done a lot of work for the people of Bangladesh.  I’ve developed the education system, there was a lot of local and foreign investment, the economy is a lot stronger.

“That’s why people like me and the Bangladesh Nationalist Party.

Sheikh Hasina: Last time I was in power I ensured their [Bangladeshis] food safety net. We ensured health, we control the law and order situation, we ensure peace. Definitely people will vote for us, they will elect us, we are confident about it.

Khaleda Zia: “From time to time, some local and international conspirators started plotting against our government and against us so we will not get good results in the election.

“They created anarchy in the streets, they paralysed the port, they uprooted the rail lines and they started killing people.

“I was under house arrest for six months. I was in jail for one year, but after nine months they submitted a charge-sheet of just one case and it is so weak that they will never be able to punish me with that charge.

“Later the government and its different agencies realised that my case is not true and it is a fabricated case. It was just done to put me in jail. Still now, I say I’m not guilty and my sons are not guilty. They did it to keep me out of politics … They could not punish me, that’s why I am standing in the election.”

Sheikh Hasina: “Already it has been proved that I haven’t been involved in any corruption, neither myself, nor my children, nor my family.

“No we didn’t do any corruption. All those cases they filed, all are vilified, false, fabricated and already it is proven.”

Khaleda Zia: “My husband was very popular. He gave the Declaration of Independence and he fought for liberation.  He was so popular that the people of the country brought him into power for the sake of the country and he became a very popular president.

“Within a very short time he did a lot of development work for the country. He contributed a lot to the economy to the country. He was assassinated by the conspirators because the people of the country loved him.

“After his assassination people thought that for the BNP to survive, in the absence of Zia Rahman, someone should take control of the party. That’s why they wanted me to lead the party.

Sheikh Hasina: “Because of my people. I love my people, my father loved these people, he worked for these people, and the independence of this country.

“I know I may be killed because my father, my mother, my brothers … My whole family was assassinated but still I am working.

“This is a commitment to the people. I want to ensure they have a better life, ensure food, security, health care, education … A better life, that was our dream for the nation. So we have a vision, a vision for a prosperous country – that’s why I am willing to sacrifice for the sake of my people, my country.”