News agency APTN reported that Israeli security officials, speaking on condition of anonymity, said that a large-scale military campaign against Gazan fighters had already been approved but delayed because of difficult winter weather conditions.

Livni’s comments came before a visit to Cairo on Thursday where she held talks with Hosni Mubarak, the Egyptian president, on renewing the Israeli-Gaza ceasefire that ended in violence on December 19.

Al Jazeera’s Amr el-Khaky reported: “Gaza, and Gaza only, has been discussed today.

“I think there are still more talks for Livni with the Egyptian foreign minister and the intelligence chief in Egypt. That’s when we might hear of a concrete result coming out of these talks.”

However, the chances of Hamas-controlled Gaza and Israel agreeing terms for a new truce look increasingly remote as both sides blame each other for violations of the old ceasefire.

Palestinian groups in Gaza, including Hamas, blame Israel for breaching the terms of the truce by failing to ease its crippling blockade of the Strip that has starved the territory of fuel, food and medical supplies.

In turn, the Israelis say they would have re-opened crossings into Gaza, so allowing supplies of fuel, food and aid to reach Gazans, if Palestinian fighters had stopped firing rockets into southern Israel.

Despite sporadic outbreaks of violence, the six-month truce had brought about a period of relative calm in the Strip.

However, clashes quickly escalated amid recriminations over who was responsible for the collapse of the truce.

Palestinian fighters have fired more than 60 rockets on southern Israel since the failure of the truce – forcing residents into bomb shelters. No one has been injured.

Israel has also carried out several deadly air raids which it says have targeted rocket-launching squads – although Palestinians say ordinary Gazans have been injured in the attacks.

In addition, Israeli politicians mindful of the general election to be held on February 10, have talked increasingly tough on Hamas.

Benjamin Netanyahu, the opposition leader, hinted that Gazan fighters would soon have access to longer-range missiles that could hit other Israeli towns and cities.

“We have to move from passive acceptance of rocketing on our cities and our towns, to active defence. This is what is required.

“In the long run we won’t be able to tolerate an Iranian Hamas base touching our cities, ultimately threatening Beersheba and Ashdod and perhaps beyond that,” he said.

“Don’t let Hamas, which is acting against the values of Islam, put you in danger,” he said. “Stop them. Stop your enemies and ours. Tell them to stop firing on innocent civilians.”

He said that Israel would “not allow a humanitarian crisis” to develop in Gaza but cautioned “we will not allow Hamas to strike our children”.

Meanwhile, Ismail Haniyeh, Hamas’s leader in Gaza, said Palestinians were not responsible for the escalation in the fighting, placing the blame firmly on the Israelis.

“Our people are not escalating. The Israeli occupation was supposed to abide by the obligations of calm [the truce],” he said.

Mahmoud Abbas, the Palestinian president and leader of Hamas rival the Fatah movement, met Egypt’s Mubarak on Tuesday for talks on brokering a new truce.

Abbas reaffirmed that Cairo is best placed to negotiate between Palestinian factions and Israel, as well as agreeing that reconciliation talks between Hamas and Fatah should be taken forward. 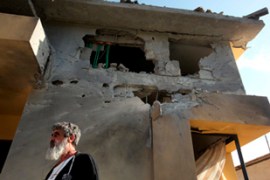