In Srinagar, the heart of a nearly 20-year separatist campaign against Indian rule, police said 15 people were injured when police clashed with stone-throwing protesters in three areas.

Three police were among the injured.

Police responded with batons and teargas.

A high turnout in the previous six rounds of the election, which began on November 17, had encouraged Indian authorities despite the scattered clashes between separatists and government forces.

Nearly 1.7 million voters were eligible to cast their votes in the last phase.

At least 393 candidates contested elections for 87 assembly seats across the state, with 21 in total up for grabs in Jammu and Srinagar cities.

“Overall the voting was peaceful and the turnout is considerably higher than in 2002 elections,” Kulbushan Jandail, the Jammu and Kashmir government’s chief spokesman, said.

Officials said there had been a 13 per cent voter turnout by mid-afternoon.

The final turnout figures will be released later on Wednesday, with the statewide poll results expected on Sunday.

Al Jazeera’s Divya Gopalan, reporting from Srinagar, said: “Authorities will see this as a disappointing end to the Kashmir state elections. Voter turnout has been low, especially when compared to the previous six phases, when voters came out in unprecedented numbers.

“There has also been sporadic violence, when protesters clashed with troops. This is despite the heavy presence of security forces in and around the city.”

She said separatist groups had called for a boycott of these elections, arguing that the vote did not address the wider issue of Kashmir’s future.

“But the voters we spoke to said they were casting their ballots for basic amenities, like better roads, schools and hospitals,” she said.

Many polling stations in Srinagar remained virtually empty throughout the day, especially in the city centre.

But there was a cheerful mood on the city’s outskirts as voters queued outside, dressed in flowing woollen robes to keep out the winter chill.

Kuldeep Khoda, director-general of Kashmir police, said that intelligence intercepts indicated that “terrorists and separatists” would try to disrupt voting.

In Srinagar, police and soldiers armed with assault rifles blocked off lanes with razor wire and iron barricades, while sniffer dogs searched polling booths for bombs.

Indian police said on Tuesday they had arrested three fighters, one of them a Pakistani soldier, for allegedly planning a suicide attack during the vote but Pakistan denied the man was a serving soldier.

Kashmiri separatist leaders, many of them under detention, had called for a boycott of the polls.

Speaking to Al Jazeera, the chairman of the All Parties Hurriyat Conference, which wants Kashmir’s independence or merger with Pakistan, condemned the heavy security presence for the elections.

“I don’t believe that under the barrel of the gun, any election has credibility when there are no observers or international community involved,” said Mirwaiz Omar Farooq, who is under house arrest.

“The majority of the people have boycotted the elections because they don’t address the key issues that people want to be addressed.” 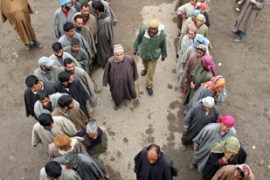 Millions turn out for state polls in Indian Kashmir despite separatists’ boycott call. 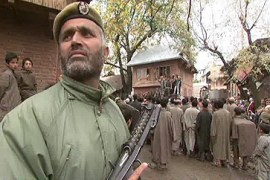 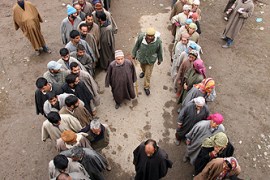