The saga has been a distraction for Obama as he prepares to take office on January 20, tested his campaign pledge of transparent leadership and focused attention on the often ugly Illinois political scene where he made his name.

Craig released the probe after poring over accounts of contacts between transition team staff and the office of Blagojevich, who is facing corruption charges.

He said the evidence supported Obama’s statement on December 11 that he had never spoken to the governor about the fate of his senate seat, which he relinquished after winning the election on November 4.

“In addition, the accounts contain no indication of inappropriate discussions with the governor or anyone from his office about a ‘deal’ or a quid pro quo arrangement in which he would receive a personal benefit in return for any specific appointment to fill the vacancy,” the report said.

The report revealed that Obama was interviewed about the case by Patrick Fitzgerald, the US attorney last week, as were Emanuel and Valerie Jarrett, another future top White House aide.

It said Emanuel had one or two telephone conversations with the Illinois governor and about four chats with his chief of staff.

But the report said there was no discussion of potential benefits for Blagojevich depending on his choice of senator, and Craig said Emanuel had simply passed on the names of qualified candidates.

Obama is on vacation in Hawaii and is not expected to directly address the report.

Craig told reporters that no one in Obama’s Chicago inner circle was aware that Blagojevich appeared to be trying to parlay the senate seat for personal gain until he was arrested for questioning on December 9.

The report is unlikely to quell interest over the Blagojevich saga however, as it did not include details of transcripts of the Emanuel calls, likely caught on FBI wiretaps of the governor’s office.

Craig said it would be up to prosecutors to offer those details  – a process unlikely to take place until any trial of Blagojevich, who last week vowed to fight to clear his name and brushed aside calls for his resignation. 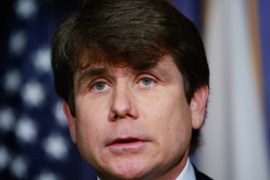 US governor charged over Obama senate seat claims says he has done “nothing wrong”.