Kashmiri separatists, many of them in jail, have called for a boycott of the seven-stage polls saying India portrays voting as an endorsement of its rule over the disputed Himalayan region, and have urged people to march to the UN office in Srinagar.

But a high turnout in the six rounds of the election so far has encouraged Indian authorities despite the scattered clashes between anti-poll protesters and government forces.

“I am voting for better government,” Imtiyaz Ahmad, a local hotelier, said before entering a polling booth.

“The government will give us security, better administration. The freedom [of Kashmir] is a separate issue.”

Polling stations in Srinagar saw only a trickle of voters in the first hours after they opened, witnesses and officials said.

Nearly 1.7 million voters are eligible to cast their votes in the last phase. At least 393 candidates are contesting elections for 87 assembly seats across the state, with 21 in total up for grabs in Jammu and Srinagar cities.

Police said they had been conducting raids in the entire state over the past few days to thwart trouble.

Tensions between India and Pakistan have risen over last month’s attacks in Mumbai, India’s financial capital, that killed 179 people.

India blames the assault on the Pakistan-based group Lashkar-e-Taiba, which was set up to fight Indian rule in Kashmir and which has been linked to Pakistan’s powerful Inter-Services Intelligence military spy agency.

Overall violence has fallen significantly across Kashmir since India and Pakistan began peace talks in 2004, although New Delih has imposed a “pause” in that dialogue since the Mumbai attack.

Officials say more than 47,000 people have been killed in nearly two decades of violence in Kashmir, which was hit by massive anti-India protests earlier this year. 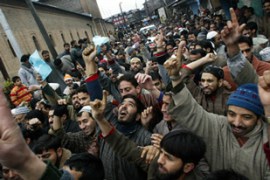 Thousands of Indian police deploy across the disputed region to secure election.