More than 600,000 police and paramilitary officers will patrol polling booths to guard against intimidation or rigging – problems that have dogged previous elections and led to the state of emergency.

“Each of the country’s 35,216 polling centres will be guarded by 14 to 18 armed policemen,” the home ministry said in a statement, adding that helicopters would be used to monitor voting in remote areas.

The December 29 parliamentary elections are the first in Bangladesh since 2001.

They end almost two years of rule by a military-backed government, which took power in January 2007, after months of violence killed at least 35 people and prompted Iajuddin Ahmed, the president, to declare a state of emergency, ban political activity and cancel elections.

Muslim-majority Bangladesh has been hit by a series of attacks by armed groups in recent years – including 400 blasts on just one day in August 2005 by the banned Jamayetul Mujahideen Bangladesh (JMB).

Last year, the government hanged six JMB senior members, including its leader and his deputy.

Sheikh Hasina, an ex-prime minister and leader of the Awami League, is seen as favourite to win the elections. She survived an apparent assassination attempt in 2004 when a grenade attack at a rally left more than 20 people dead and saw her car raked with bullets.

Sheikh Mujibur Rahman, her father, who led Bangladesh in its liberation struggle against Pakistan in 1971 and became the country’s first president – was assassinated in 1975, along with most of her immediate family.

Monday’s vote will be the ninth parliamentary elections in Bangladesh. 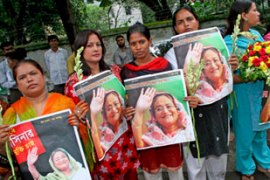 Move by army-backed administration comes in run-up to elections on December 29.