It directs Monuc “to attach the highest priority to addressing the crisis in the Kivus [eastern DRC], in particular the protection of civilians, and to concentrate progressively during the coming year its action in the eastern part of the Democratic Republic of Congo.”

The incumbent detail of 17,000 peacekeepers have been accused by rights groups of not doing enough to protect citizens in DR Congo, affected by increased fighting between the Tutsi National Council for the Defence of the People (CNDP) rebel forces and the army since August.

The UN has complained that their force is not large enough to cope with the crisis in a country the size of western Europe and has had too narrow a mandate.

The resolution’s text is said to have now been bolstered by saying that Monuc should work “in close co-operation with” DR Congo’s government rather than “support” the army.

“This is important because the [Congolese army] in its present status cannot be the sole foundation for the strategy against armed groups,” Karel De Gucht, the Belgian foreign minister, told the security council.

“It can now also take action if uncontrolled elements of the [Congolese army] are at the source of violent acts against the population.”

Jean-Maurice Ripert, France’s UN ambassador, said the resolution sent a clear message that Monuc was empowered to act against those who would endanger the peace process.

Ripert said the text declares that regional states “must co-operate with the DRC government to help bring about a return to lasting peace and security on DRC territory.”

“We welcome the reinforcement of the bilateral Rwanda-DRC dialogue which we view as one of the keys to regional stability.”

Rwanda’s Tutsi-led government has been accused of assisting the CNDP, which is led by Laurent Nkunda, a renegade Tutsi general.

Nkunda accuses the government and armed forces of Jospeh Kabila, the DR Congo president, of supporting Rwandan Hutu rebels during the Rwandan genocide in 1994.

On Monday, the CNDP threatened to pull out of the next round of peace talks in January unless negotiators address violations of the ceasefire by the government.

The rebel group accuses the government of occupying a vacated buffer zone between the two forces that is supposed to be controlled by the UN.

Resolution 1856 also authorizes Monuc to use “its monitoring and inspection capacities to curtail the provision of support to illegal armed groups derived from illicit trade in natural resources.”

The eastern region is rich in minerals, such as tin ore, gold and coltan, underlining the a decade of conflict in the region. 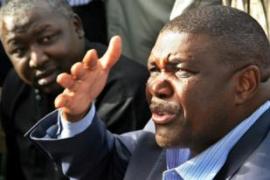 LRA base ‘attacked’ in DR Congo 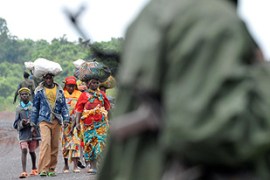 Meeting in Nairobi comes a day after the UN envoy announced the collapse of talks. 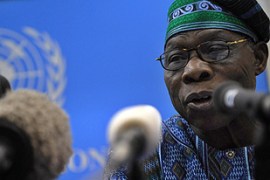 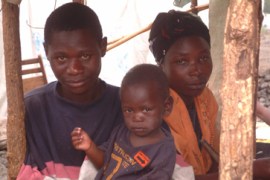 Forced from their homes by the fighting, 60,000 people now reside in the Kibati camp.