Stephania, 12, lives here with her mother, a prostitute. Their home is a former brothel, their bedroom is one quarter of an old bathroom, their bed takes the place of the ripped out bathtub.

Once a prosperous commercial area of Colombia’s capital, the past two decades have seen the avenue fall into disrepair.

Victims of poverty and growing national inequality, Stephania and her mother migrated to the street from Medellin, Colombia’s second city, for work.

Stephania has never met her father, who is wanted by the police for murder.

Her mother has chronic depression. One day she treats Stephania kindly, on another she will beat her. What is regular is for her mother to arrive home and tell her daughter details of her work.

There are few people willing to help Stephania and the other children living on and around the streets of Colombia – they are a social group typically stigmatised, marginalised and at times persecuted.

But some non-governmental organisations (NGOs), such as Fundacion Ninos de los Andes and Fundacion Renacer in Bogota and Fundamor in the cities of Cali and Bogota, provide emergency care, meals, education, psychologists and counselling for between tens to hundreds of youngsters.

The Fundacion Ninos de los Andes patrols the area where Stephania lives to find vulnerable children and offer them day care and refuge at their centre off Avenue Caracas, itself one floor of a former bar and prostitutes’ living quarters.

The organisation has four centres around the capital and one on its outskirts for children left on the streets, in danger or with a drug habit.

Without the centre, Stephania would be left alone during the day, or would stay with two other girls, both daughters of prostitutes.

Maryibe Jalero Cardona, a social worker at the centre, says that there are three main dangers for Stephania.

“The constant contact with prostitutes and their world means that daughters can think that it is normal and follow it,” she says.

“The room Stephania and her mother live in is rented by the night, so they could easily be chucked out if they don’t pay. Stephania may think that she could work as a prostitute if they just need the money for one night’s rent.”

The second danger is that drug use is widespread in the area – whether cocaine, marijuana or ecstasy.

The third is abuse by any of the significant number of men trawling the streets for prostitutes day and night.

In the 1970s and 1980s, as Colombia’s internal conflict raged, street children were often killed by paramilitary “death squads” and police officers acting as vigilantes.

The children became known as “los desechables” (the disposables) – a name still used by some people today.

For protection, street children fled to live on ledges in the city’s labyrinth of sewers.

Here they risked drowning by flooding sewage, death from disease, or on a few occasions, incineration by petrol bombs thrown into the sewers by the “death squads”.

Eventually, some individuals attempted to provide aid for the children.

In 1973 Jaime Jaramillo, an oil executive from Bogota, started to wade through the sewers to rescue these children if they wanted assistance, acting despite the noxious conditions – often using scuba-diving gear with an oxygen supply.

He created the Fundation Ninos de los Andes in 1988, helping to remove all the children from the sewers.

And in the 1990s, the government in turn began to prosecute police officers and death squads accused of killing street children.

The Colombian economy has grown, expanding by 6.8 per cent in 2006. This has benefitted the middle and upper classes, but poorer Colombians have seen little improvement in their living standards.

The Andean state is one of the most unequal nations in the world, with the richest 10 per cent earning 30 times more than the poorest 40 per cent.

Almost a quarter of Colombia’s 12 million children between the ages of five and 17 do not attend school due to poverty, displacement and violence.

A Universidad Externado de Colombia study from 2007 said 35.4 per cent of all children in Colombia did not live with their parents.

It is estimated that about 60,000 children live on Colombia’s streets – 37 per cent of them in Bogota.

Furthermore, those displaced are targeted by illegal armed groups operating in cities.

About 600 youngsters have been murdered in the slum areas of Ciudad Boliviar and Altos de Cazuca, on the fringes of Botoga, over the past five years.

About one-quarter of street children are assisted by public institutions or groups commissioned by the state.

But those without assistance typically steal, scavenge or deliver drugs for dealers to survive.

Amanda Valdes, a co-ordinator at the ministry of social protection, said an institutional board has been set up to develop a national policy to define child rights and laws to guarantee them.

“The policy is looking to defend the rights of the child to exist, to develop, to be citizens and to be protected,” she says.

“There is no targeted policy for street children, only those for people living in poverty,” but there are laws to protect children from labour, exploitation and sexual abuse, she said.

More help is needed in a country where a four-decade-old conflict between the government and left wing rebels has contributed to Colombia having the second highest number of displaced people in the world.

Robyn Braverman, the country director of Save the Children in Colombia, said: “It’s almost like a forgotten sector of the population here … and the level of inequality is dangerous. It foments the idea that if you are poor, you can’t get ahead.

“Unfortunately because of the huge amount of government debt and military spending, you see very little going into social protection.

“The issue of citizen security is the biggest risk to these kids. There is no level of security. The issue of domestic violence is huge. Abuse by the regulatory armed forces, especially to girls, is skyrocketing.”

Braverman says that the remobilisation of paramilitary forces in 2008 has led to the increase in exploitation of children, “through direct recruitment, using children as messengers, under age girls being used in some form of prostitution”.

“So some of the basic rights of children are not being upheld, especially with regards to education, health and protection.”

She says, however, that changing society’s attitude to make children the subject of their own rights and to reduce their risks to hazards is a difficult task.

“It’s a hard job … actually going out and saying that you have a right to education, to your family. And they are taking a huge risk themselves, going out on to streets at any time to look for children.”

Some children do make their way from the toil that besets their lives to mainstream society.

For instance, the Fundacion Ninos de los Andes has helped children go into jobs in the oil industry and as weavers.

And children such as Stephania gain from them what society does not provide.

As Marta Tovar, the foundation’s social director, says: “One of the worst problems for these children is that there is a lack of hope.” 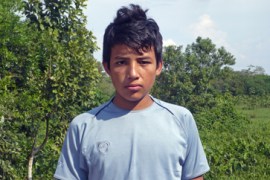 Peasants say there are few alternatives to the cocaine trade. 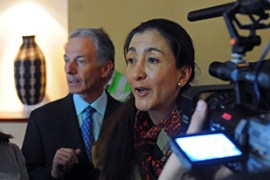