“If you’re not surprised we need to do something about it,” he said.

However, the markets failed to immediately rally and the price of crude oil actually sank to $40.20 following the announcement, the lowest level since the summer of 2004.

The failure to restore market confidence is a clear indication that investors remain cautious that the world is in for a long, painful recession during which energy use will continue to fall.

There had also been earlier speculation the cut could be combined with a reduction of 600,000 barrels a day by non-Opec members Russia and Azerbaijan.

However, Moscow is reported to have distanced itself from direct ties with the 13-nation producers’ group, dampening hopes of further coordinated production cuts.

Although Igor Sechin, the Russian deputy prime minister, and Natik Aliev, the Azeri energy minister, announced the 600,000 barrel cut, their reductions appeared to be largely symbolic.

Russia indicated its reduction had already been implemented back in November, while Azerbaijan said its output had been reduced by a third because of production problems earlier in the year.

Ali al-Nuaimi, the Saudi oil minister, said: “We also hope that other producers who are not in Opec will chip in for the purpose of bringing stability to the market.”

Oil demand has dwindled in recession-hit industrialised nations, and the cut was endorsed by many of the group before the meeting in an attempt to stabilise the price.

“If unchecked, prices could fall to levels which would place in jeopardy the investments required to guarantee adequate energy supplies in the medium to long term,” a statement released by Opec said.

An overall reduction of 2.6 million barrels per day would remove about three per cent of the world’s daily output. 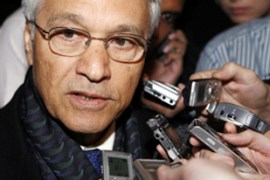