“The ANC more than anybody else should know that there is no possibility of us going back, we are now looking forward to the elections,” said Mosiuoa “Terror” Lekota, the new party’s interim chairman.

“Even if some of us do decide to rejoin the ANC, that will not mean an end of the party … it will always be there.”

The party is holding a two-day conference to iron out an election campaign and formally adopt policies, with Lekota expected to be ratified as leader in a final session on Tuesday.

Lekota resigned his post as defence minister after the ANC, led by Jacob Zuma, ousted Mbeki as state president in September. The current president of the country is Kgalema Motlanthe.

Zuma’s camp had accused Mbeki of trying to use a corruption case to ruin his rival’s political career.

Zuma’s triumph over Mbeki in the bitter leadership contest one year ago led to the purging of Mbeki supporters from party positions, stretching from parliament to local districts.

Although Cope would be hard pressed to defeat the ANC, which has won about two-thirds of the vote in previous elections, it could gain enough black votes to deny the ANC an absolute majority in parliament.

Cope seeks to capitalise on anxiety among middle class voters and business over the influence of trade unions and left-wing elements in the ANC, which traditionally portrays itself as representative of all South Africans.

“This is a grassroots revolt against the ANC,” said Allister Sparks, a political analyst who views the formation of Cope as healthy for South Africa.

“We’ve had 10 and a half months of ruthless drilling at the [ANC] branch levels.”

The ANC has dismissed Cope’s leaders as sore losers and politically irrelevant, while warning its members not to be seduced by the new party with some suggesting instituting loyalty oaths in response to the new rival.

The ANC is planning a parallel rally, also in Bloemfontein on Tuesday, which will be addressed by Zuma.

Bloemfontein, situated in the heartland of the country, holds significant historic memories as the ANC’s birthplace in 1912.

Cope said it chose that city as a reminder of principles that the ANC has abandoned.

“The ANC has veered off the principles and values that laid the foundation of the party… We want to revive those ideals and lead our people to a better future,” said Charlotte Lobe, the party’s interim general secretary.

The new party’s name has been the subject of a fierce court battle with the ANC, which accuses the defectors of laying claim to an historic meeting in the 1950s. 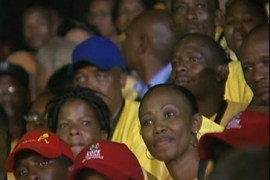 Defectors from the ruling African National Congress have created a new party. 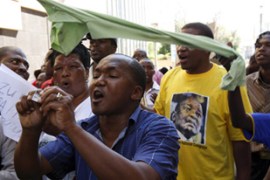 Court rules breakaway faction of governing party can use name it has chosen.