The voyage is widely seen as a show of force close to US shores and a response to the US use of warships to deliver humanitarian aid to Russia’s neighbor Georgia after their war in August.

The ships’ visit coincided with a Latin American tour by Dmitry Medvedev, the Russian president, who raised Russia’s profile in the region and met with Fidel Castro, the former Cuban leader.

The United States has maintained an economic embargo against Cuba since 1962, after a failed US attempt to overthrow Castro’s fledgling Cuban government.

Later that year, the world came close to war when the Soviet Union placed nuclear missiles on Cuba.

The crisis ended two weeks later after the Soviets agreed to remove the missiles for a US pledge not to invade the island.

Moscow’s support for Cuba sharply decreased after the 1991 Soviet collapse, but Russia has moved to bolster ties to the island recently.

The Russian ships in Latin America now have held joint exercises with the navy of Venezuela, whose president Hugo Chavez is a fierce US critic, and the Admiral Chabanenko became the first Russian warship to sail through the Panama Canal since World War II.

The destroyer and two support vessels left Nicaragua on Sunday after delivering $200,000 worth of medicine, computers and other humanitarian aid, Nicaraguan spokesman Juan Morales said.

The Peter the Great remains in the Caribbean but will not visit Cuba, Dygalo said. 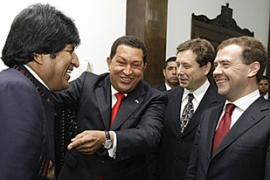 Medvedev and Chavez in nuclear deal

Russian and Venezuelan presidents sign accord for Moscow to help build energy plant. 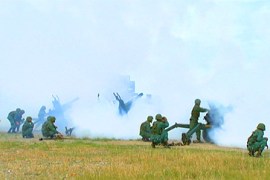 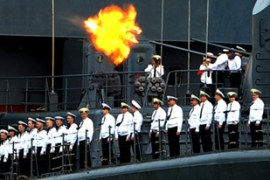 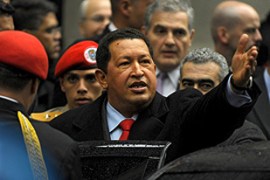 Moscow to stage first military exercises close to the US since the Cold War.