Brown met Manmohan Singh, his Indian counterpart, at his residence in New Delhi amid continued tensions between India and Pakistan over the Mumbai attacks, which claimed more than 170 lives.

Those tensions were evident on Sunday as Pakistan accused the Indian air force of violating its airspace in the east of the country.

India has blamed Lashkar for the Mumbai attacks and called on Pakistan to crack down on fighters operating out of its territory.

According to India, the 10 assailants were from Pakistan, as were the handlers and masterminds.

The plotters’ weapons, training camps and financing were also based in Pakistan, New Delhi has alleged.

Pakistan has carried out raids on a charity believed to be linked to Lashkar, but has called on India to provide further evidence.

On his arrival in Islamabad, Brown stressed that Pakistan was itself a victim of terrorism, having suffered 50 suicide attacks this year.

“I think it is right that we have to help Pakistan to root out terrorism in its own country … all of us suffer when terrorists are active and are able to impose their will,” he said.

The money provided as part of the “anti-terror” initiative will be used to fund a number of programmes to tackle the cause of radicalisation and prevent Pakistan from being used as a base for attacks.

“Three-quarters of the most serious plots investigated by the British authorities have links to al-Qaeda in Pakistan. Our aim must be to work together to do everything in our power to cut off terrorism,” Brown said.

He agreed with Asif Ali Zardari, Pakistan’s president, that London and Islamabad would work together to share information, while aiming to improve airport security and identify centres of extremism.

“Through these measures we hope to do more to break the chain of terror that links the mountains of Afghanistan and Pakistan to the streets of the UK and other countries around the world,” Brown said during a news conference with Zardari.

Just hours before Brown’s visit, Islamabad said that Indian aircraft violated its airspace, crossing into Pakistan-controlled Kashmir and over the eastern city of Lahore before being chased back over the border.

Sherry Rehman, Pakistan’s information minister, said India’s air force had told Islamabad that the incursion was “inadvertent” but New Delhi denied there had been any such occurrence.

He described the Pakistani accusations as an attempt to divert “the attention of the people towards something which has not happened”.

Zardari played down the incident during the news conference with Brown.

“Incursions do happen,” he said, adding that the aeroplanes were flying at about 12,000 metres when they executed a turn that “slightly entered Pakistan soil”. 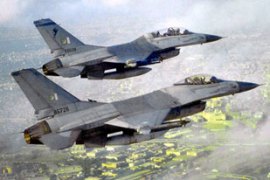 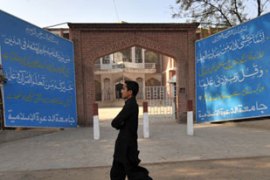 Founder of Lashkar-e-Taiba is placed under house arrest and his charity is closed. 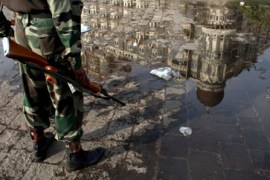 Jamaat-ud-Dawa alleged to have links to armed group accused of role in Mumbai attacks. 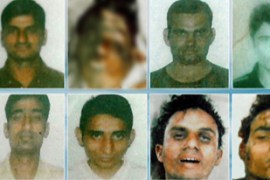