“We need all the support we can get from peace-loving nations,” he said.

Ndlovu’s plea for help appeared to contradict Mugabe’s comments on Thursday when he told a crowd “we have arrested cholera”.

Opposition figures, aid workers and foreign officials attacked Mugabe over his remarks about the cholera outbreak.

Zimbabwe’s Movement for Democratic Change (MDC), led by Morgan Tsvangirai who would become prime minister if a stalled power-sharing agreement with Mugabe’s Zanu-PF is ever implemented, said “either Mr Mugabe is mischievous or genuinely out of touch with reality”.

Nelson Chamisa, a spokesman for the MDC, said: “Instead of conveying a message of condolences, Mr Mugabe was busy politicking.”

The cholera epidemic has spread as sewage and water lines have broken down contaminating the drinking supply.

“I don’t think that the cholera outbreak is under control as of now,” Fadela Chaib, a WHO spokeswoman, said as she announced that more than 16,700 cases had now been reported.

Medecins Sans Frontieres (MSF), a medical aid charity, said on Friday that the epidemic was likely to last for months.

“The scale and the sheer numbers of infections especially in Harare is unprecedented,” the organisation said.

“MSF expects to be caring for cholera patients in Zimbabwe for some time to come.”

The foreign minister of Britain, Zimbabwe’s former colonial ruler, said that Mugabe was responsible for “death and destruction on a grand scale” and dismissed the 84-year-old leader’s claims that the situation had been resolved.

“It’s evident to anyone who hears the tales of people in Zimbabwe that cholera remains a very significant problem,” David Miliband told the Associated Press news agency.

“I wish it had been curtailed or curbed, but I think that the public health situation in Zimbabwe is very, very grave indeed,” he said, speaking on the sidelines of an EU summit in Belgium.

The government has accused the Western media of distorting Mugabe’s speech.

George Charamba, the president’s spokesman, told the state-run newspaper The Herald that the president had spoken with “sarcasm”.

The central bank introduced a new 500 million dollar note, worth about $10, as Zimbabwe struggles under the world’s highest inflation rate, last estimated in July to be 231 million per cent. 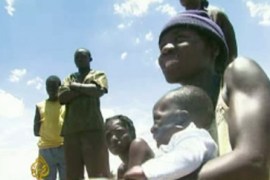 UN increases estimate of the number of people killed by cholera in Zimbabwe to nearly 800. 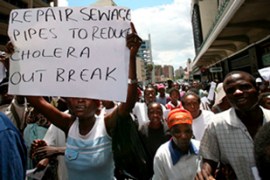 UN health agency warns of catastrophe while Harare insists epidemic is “under control”. 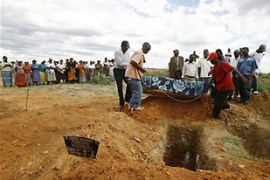 WHO: Zimbabwe cholera may worsen

World Health Organisation warns of catastrophe as minister insists epidemic is “under control”.