He also urged the army to “respect the people’s decision” and “behave with a sportsman’s spirit and not intervene”.

Selina Downes, Al Jazeera’s correspondent in Bangkok, said it was not known when the address was recorded and described it as “quite measured”.

“[He] was not calling for a revolution, he called for all sides to resolve their differences … most people will be surprised by just how tame Thaksin’s speech was,” she said.

Tens of thousands of Thaksin supporters had gathered in a sports stadium in the capital for what was expected to be a live telephone address by the former premier.

The live speech was dropped and replaced by a 20-minute, pre-recorded address.

Thaksin, who was ousted from power in a 2006 military coup and recently convicted in absentia of breaching conflict of interest laws, delivered his address just two days before the Thai parliament is scheduled to elect a new prime minister.

The former premier faces two years in jail if he returns to the country from self-imposed exile – his exact whereabouts is now unclear but he was based in the UK until the British government revoked his visa in recent weeks.

Somchai Wongsawat, Thaksin’s brother-in-law, was forced to step down as prime minister on December 3 after a court found his People Power Party (PPP) guilty of fraud in the 2007 election.

Thaksin’s address is widely seen as a last-ditch attempt to rally support for the latest incarnation of his party, now named Phuea Thai.

Phuea Thai wants Pracha Promnok, a former national police chief and leader of the allied Puea Pandin party, to be elected as the new prime minister.

But the opposition Democrat Party insists that it has enough support from ministers who have defected from the former ruling party to elect its candidate, Abhisit Vejjajiva.

The new leader will be Thailand’s fifth prime minister in a little more than two years.

Downes reported: “[Thaksin] is a hugely popular figure here, especially among the rural poor. People that we have spoken to are angry about the way in which the government was dissolved by the court.

“However, the opposition Democrats seem confident they can form a government … it does appear that some MPs previously loyal to Thaksin may have, in fact, crossed the floor … something that we wouldn’t have expected even a few weeks ago. That will not go down well with those supporters gathered here.”

The country has been disrupted by months of protests by an anti-Thaksin alliance that occupied the prime minister’s office from late August until last week and brought the capital’s airports to a standstill. 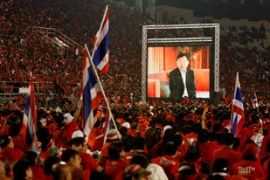 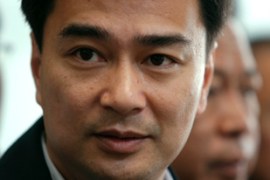 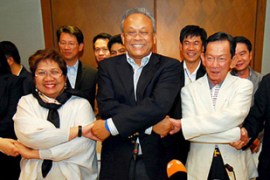