“Among the dead are women and children as the bomber blew himself up inside the family section,” Ahmad Saleh, an Iraqi journalist who was near the scene of the blast, told Al Jazeera.

“The restaurant is a very popular one and has many foreign workers. Government officials also go there frequently,” he said.

Kurdish official said Arab tribal leaders were in the restaurant at the time of the attack, having lunch with members of the Patriotic Union of Kurdistan, the party of Jalal Talabani, the Iraqi president.

They were due to attend a meeting with Talabani after the lunch to discuss ways to defuse tensions among Arabs, Kurds and Turkomen in the Kirkuk area.

One official from the Patriotic Union of Kurdistan was killed, a spokesman said.

The reason behind Thursday’s bombing was not immediately clear.

Kirkuk, the centre of Iraq’s northern oil fields, has seen fewer attacks than other regions in Iraq but remains the focus of years of competition and political wrangling among ethnic groups, including Arabs and Kurds, with rival claims to the city.

Both groups want control Kirkuk, the Kurds as part of a breakaway territory with the surrounding Tamim province and their own self-ruled region in northern Iraq.

The Abdullah restaurant where the attack occured is on the main road from Irbil to Kirkuk and is popular with Kurdish officials moving to and from the nearby Kurdish region.

It is affiliated with another Kurdish restaurant of the same name which was attacked by a car bomb in 2007. Six people died due to that blast. 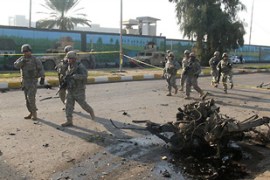 Attacks come a day after bombs killed more than 30 people in Baghdad and Mosul. 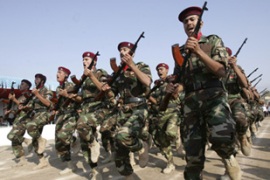