It is five in the morning when I leave my hotel to go to pray at the Grand Mosque, but you would never know it was so early.

The streets are overflowing. People walk briskly as they compete to secure their place as close as possible to the Kaaba, the building inside the Grand Mosque towards which all Muslims around the world pray.

Suddenly, amidst all the hustle and bustle, the voice of the imam – the prayer leader – echoes throughout. The prayer has started.

As if choreographed, the millions of pilgrims form almost perfect rows, all facing in the same direction.

All that can be heard is the voice of the imam. No one talks, no sound of traffic, not another noise.

The order and discipline in which the pilgrims lined up to perform the prayer is astounding.

Over breakfast we decide that we will go to film the Saudi security forces as they demonstrate the preparations and precautions taken in advance of the largest gathering on earth.

According to the ministry of interior, 100,000 security and safety personnel have been deployed in Mecca alone, the largest deployment in history.

From special services to ensuring no breach of security takes place, to mobile hospitals and thousands of fire fighters, it’s apparent that the Saudis are determined not to allow disasters of past Hajj be repeated.

And while it is inevitable that three million people gathered anywhere makes it almost impossible to prevent any casualties or fatal incidents, one must admire the effort made by the authorities in Mecca this year.

Having said that, the real test is still to come, when the pilgrims follow Abraham’s footsteps, and throw seven pebbles in Mina, where it is believed the Devil tried to dissuade Abraham from obeying God.

A stampede a few years ago resulted in hundreds of pilgrims dying during this ritual.

The sun had set by the time we returned from our shoot.

The lighting of the Grand Mosque cast a glow across its dark surroundings.

The affinity and familiarity I feel towards it still surprises me.

I take a walk around. Everywhere I look what I see makes me gasp.

Thousands of pilgrims lie asleep on the grounds of the mosque.

Muslims believe that if one performs Hajj, he or she returns sinless, like a baby.

But the rituals are also meant to remind the believer that all humanity is equal and that while we may be divided through race, class or circumstance in this world, we will all face our Creator in the hereafter.

It is only day two but these ideals and manifestations have become overwhelmingly apparent here in Mecca. 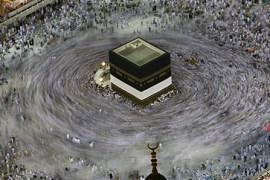