It said Abu Mohamad Awad has been elected to succeed Abssi as the new head of Fatah al-Islam.

The statement said al-Abssi had fled to Syria after Fatah al-Islam fought a 15-week battle with the Lebanese army last year at Nahr al-Bared, a Palestinian refugee camp in northern Lebanon.

At least 430 people were killed in the fighting, over half of them were reportedly fighters from the group, which draws its members from across the Arab world.

At least 170 Lebanese troops were also killed in the fighting.

In November, Lebanon arrested six fighters suspected of belonging to Fatah al-Islam and being involved in bomb attacks in Lebanon and Syria.

The armed group has also been blamed for a suicide car bomb in Damascus last September, which left 17 people dead.

Syrian state television aired footage of 12 alleged members of the group confessing that they had helped plan the attack. 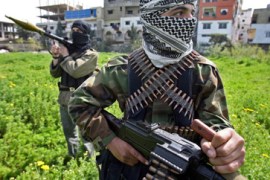 Armed Sunni Palestinian group is thought to have links to al-Qaeda.