He also warned that the global financial crisis would strike hard at the developing world, and called on governments not to cut back on foreign aid.

Ahtisaari, a former diplomat, received the award for decades of peace work around the world, including a 2005 deal that ended fighting between the Indonesian government and opposition fighters in the province of Aceh.

Other conflicts the 71-year-old was involved in mediating included those in Namibia and Kosovo.

So far he has not sought a role to mediate in the Middle East.

In line with the 1895 will of Nobel, while the peace prize is awarded in Oslo, the awards in chemistry, physics, medicine, literature and economics are handed out in Stockholm.

Researchers who discovered the Aids virus, a United States economist and a French writer were among the recipients at Wednesday’s ceremony in the Swedish capital.

The medicine prize jury cited French researchers Francoise Barre-Sinoussi and Luc Montagnier for their discovery of human immunodeficiency virus, or HIV, in 1983.

They shared the award with Germany’s Harald zur Hausen, who was honoured for finding human papilloma viruses that cause cervical cancer, the second most common cancer among women.

Japan’s Osamu Shimomura and Americans Martin Chalfie and Roger Tsien shared the chemistry prize for discovering and developing a fluorescent protein that has helped researchers track such processes as the development of brain cells, the growth of tumors and spread of cancer cells.

Japanese scientists Makoto Kobayashi and Toshihide Maskawa split the physics award with American Yoichiro Nambu for theoretical advances that help explain the behaviour of the smallest particles of matter.

The Swedish academy continued a trend of honouring European writers by selecting for the literature prize Jean-Marie Gustave Le Clezio from France, the author of more than 40 works including The Book of Flights and Desert.

Paul Krugman, a US economist and New York Times newspaper columnist, won the Nobel memorial prize in economic sciences for his analysis of how economies of scale can affect international trade patterns.

Nobel prizes, which include a $1.2m purse, a diploma and a gold medal, are awarded on December 10 every year to mark the anniversary of the death in 1896 of Alfred Nobel, the prize’s founder.

Nobel, a Swedish industrialist and the inventor of dynamite, died in San Remo, a link that the Italian city marks by sending flowers to decorate the annual ceremony in Stockholm. 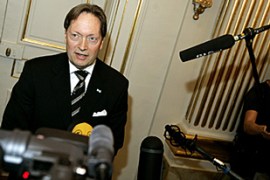 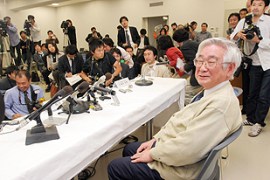 Japanese duo and US scientist share the award for their work on particle physics. 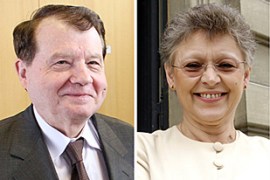 French and German research into viruses linked to Aids and cervical cancer honoured. 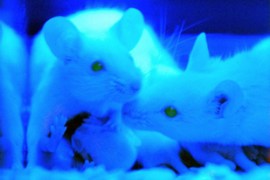