Reverend Dmitry Smirnov, a Moscow archpriest, said Alexy was primarily responsible for the revival of the Russian Orthodox Church, which claims about two-thirds of Russia’s 142 million people as its following and also controls Orthodox churches in several former Soviet republics.

“The number of churches multiplied to 30,000 and the number of monasteries to 700 from 18,” he said in an address at the ceremony broadcast on television.

“This is a fantastic number, so fantastic it is difficult to believe, but it is true.

“We are burying a great man, a great son of our nation, a beautiful holy fruit grown by our Russian church,” he said.

The funeral followed nearly three days of viewing of the patriarch’s body, with 80,000 people lining up outside the cathedral to file past his coffin and pay their last respects.

Alexy’s body lay in an open casket surrounded by flowers and candles in the cathedral near the Kremlin, his face and body covered by a white-and-gold embroidered cloth.

The ceremony was led by Metropolitan Kirill, Alexy’s temporary replacement and a contender to become the next patriarch.

However, that decision might not be made for several months.

“His Holiness always remembered that the Russian Orthodox Church was the only one which preserved the traditions, the memory and the values of holy Rus,” Kirill said in a tribute delivered next to the coffin.

The 62-year-old Kirill was helped away by aides at one point and a Kremlin official said he had apparently fainted. The metropolitan later rejoined the funeral.

Alexy’s most tangible accomplishment was his signing of a 2007 pact with the leader of the breakaway Russian Orthodox Church Outside Russia, a product of a split prompted by the advent of communist rule, to bring the churches closer together.

During his time as patriarch, secular liberals and leaders of other faiths expressed concern that the dominant Russian Orthodox Church was gaining too much influence over temporal life and growing too close to the state.

He successfully lobbied for the passage of a law in 1997 that placed restrictions on the activities of religions other than Orthodoxy, Islam, Judaism and Buddhism.

But supporters say he was a force for moderation, forging warm relations with Russia’s large Muslim and smaller Jewish minorities and keeping radically nationalist camps in his own church under control.

Alexy’s death left long-standing disputes with the Roman Catholic Church, reflecting both age-old and recent tensions between Russia and the West unresolved.

His opposition to what the Russian Orthodox Church alleged was Catholic encroachment on its traditional territory thwarted the late Pope John Paul II’s dream of visiting Russia more than a millennium after the Great Schism of 1054 divided Christendom between East and West. 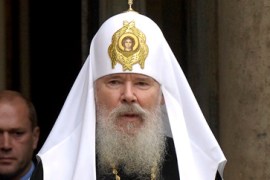 Patriarch to be remembered for bringing the Church out of the dark age of Communism. 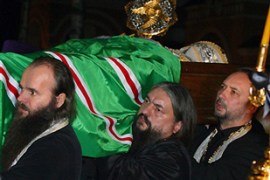 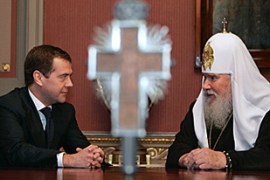 Patriarch Alexy II passes away in his home outside Moscow, church spokesman says.