Clashes between security forces and students escalated after police killed a 15-year-old boy on Saturday.

As news of the death spread, thousands of protesters turned out on the streets of Athens, the Greek capital, and other cities across the country, setting fire to cars and looting shops.

Analysts say that while the police shooting sparked the violence, it only lit the fuse provided by long-simmering anger over a poor economic outlook in the country and a series of political scandals involving the government.

“The riots started because of the killing, but it was just the cherry on the cake: the problem is the government’s economic policy, the scandals, its apathy,” Takis Kafetzis, professor of politics at the University of the Peloponnese, said.

George Papandreou, Greece’s Socialist opposition leader, has demanded that the conservative government step down and call elections to help end the violence.

After a decade of growth in Greece, Costas Karamanlis, the prime minister, now faces increasing problems from the global economic crisis and his ruling New Democracy party is hanging onto a majority of only one seat.

Unemployment is at seven per cent and rising, while inflation remains high and economic growth is predicted to more than halve next year.

“If we have riots again, and we see Athens burn again, we cannot rule out [early] elections,” Kafetzis said.

New Democracy was already trailing the opposition Socialist party in opinion polls by more than five points before the violence began.

“The riots will have a negative impact in polls because people perceive the government as weak,” Anthony Livanios, head of pollster Alpha Metrics, said.

“If this continues it will have a devastating effect on the government and on stability.”

But as police struggle to bring rioters under control, trade unions are preparing for a 24-hour general strike on Wednesday against pension reform, privatisations, and the rising costs of living.

Unions and the opposition accuse the government of only caring for the wealthy. Despite the years of economic growth, one fifth of the country’s population lives below the poverty line.

High-profile scandals, such as overpriced public bond sales and illegal phone taps, have also fuelled anger at a lack of accountability.

“It is clear that Caramanlis is in a difficult position, something he has not seen in five years,” Theo Livanios, a pollster for the Athens-based Opinion Institute, said.

“Without a doubt, he must organise a ministerial reshuffle at the start of next year to restore his reputation.” 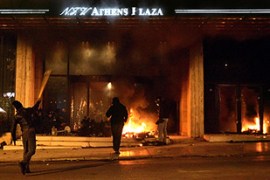 More than 200 fires started across the capital Athens amid ongoing unrest sparked by teenager’s shooting. 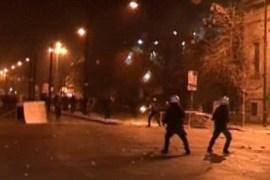 Youths clash with police on the streets of Athens.