He said: “The European competition authorities are going to be reviewing so many airline mergers over the next three, six, 12 months, it makes sense to us to revisit this thing now.”

O’Leary said the takeover would create a fourth major European airline group after the creation of Air France-KLM, Lufthansa’s purchase of Swiss and British Airways’ planned tie-up with Iberia.

Ryanair, which has already bought 29.82 per cent of Aer Lingus shares at an average $3.15, said the all-cash offer at $1.77 represented a 28 per cent premium over the average closing price for Aer Lingus shares in the 30 days to November 28.

Aer Lingus’ board rejected the bid on Monday.

In a statement, the airline said: “The board rejects this new offer and Aer Lingus shareholders are strongly advised to take no action in relation to the offer.”

The European commission declined to comment on the bid. 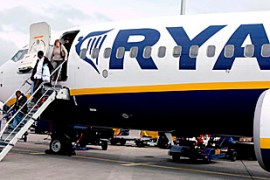 Ryanair, the budget airliner, has sued the British government for £3 million after stepped-up airport security caused it to cancel flights and lose money.

Low-cost airline Ryanair has been ordered to repay millions of euros in Belgian subsidies, a decision its CEO slammed as a budget travel disaster.